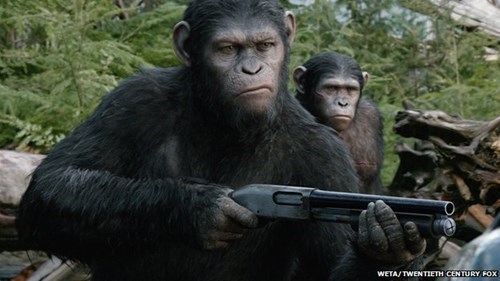 The new film continues the story of that rebellion's instigator, an intelligent chimpanzee by the name of Caesar, but picks up his story after a manmade virus has devastated the human population. Amid the rubble of our civilisation, the apes are pitted against surviving pockets of Homo sapiens in a battle for mastery of the planet.

Prof de Waal calls the storyline "impressive", adding: "I'm not usually into action films like this one, but this held my attention.

"The apes are very humanised: They walk on two legs, they talk - somewhat - they shed tears. In real life, apes do a lot of crying and screaming, but they don't produce tears like we do."

However, other aspects of ape behaviour in the film, he says, are true to life.

"We know chimpanzees are aggressive and territorial - they wage war. The use of tools and weapons is also a possibility," he explains.

To quote a colleague in his field, he said: "If you gave guns to chimps, they would use them."