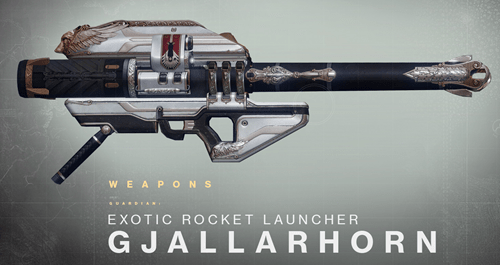 Maybe you know what most of the words mean in that headline and maybe you don't. Either way, you should know today is a big day for a small selection of video game players.

For the first time since shortly after the launch of Destiny, Xûr, the mysterious Agent of the Nine who appears in different parts of the social areas every weekend to hock rare exotic wares, is selling the most powerful weapon in the game: Gjallarhorn.

Gjallarahorn (or Ballerhorn as it is colloquially known) is a rocket launcher and in the Bungie-developed shooter that's basically an MMO, it's really helpful to have something so powerful when bosses can take a while to beat.

The reason this is something of a bigger deal is because Gjallarhorn was a very elusive drop that became something of a necessity for seasoned players who ventured into Destiny's repetitive but rewarding grind day after day. For many unlucky people (myself included), the random number generator-based loot drop system employed by Bungie never gave up the Gjallarhorn goods. But today and through this weekend, they can purchase it with dignity.

It's a big deal. Hell, even Forbes wrote about it because who knows what their focus is anymore.

The Internet's reaction to this has been pretty fantastic. It was even trending on Twitter throughout America. But the best reaction has been from the Destiny subreddit.

Mods there declared it a free-for-all holiday with a post entitled, "ATTENTION ALL GUARDIANS: TODAY, AUGUST 14TH, HAS BEEN DECLARED AN OFFICIAL /R/DESTINYTHEGAME HOLIDAY. IN THE SPIRIT OF "GJALLARHORN FREEDOM WOLFPACK PEW PEW BOOM DAY" THE MODS ARE BASICALLY DOING NOTHING. SH*TPOSTS, REPOSTS, NO-EFFORT, CLICKBAIT POSTS WITH MEMES ARE NOW ENCOURAGED."

All users on the site have been given Gjallarhorn flair next to their posts. The banner image has been done up for the holiday.

And even the cursor has been turned into a Gjallarhorn for maximum celebration.

So if you're one of the unfortunate masses who have never heard the sweet destruction from a Gjallarhorn muzzle, head over to the tower, give Xûr 17 Strange Coins and buy one for yourself.

Captain Shimmer of the Celestial Rangers