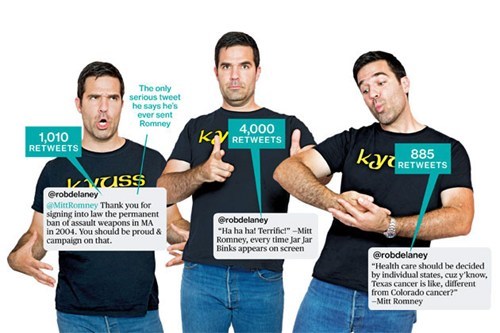 Mitt Romney's campaign is working hard to increase the candidate's Twitter presence, but on any given day, the most heavily retweeted mentions of @MittRomney come not from the candidate, but from comedian Rob Delaney.

Delaney claims no political affilliation, but his frequent abuse of Romney is nonetheless revealing:

Romney fascinates me endlessly. He's such an attractive target comedically because more than any other candidate in my lifetime, he just wants to be president. That's it! He longs for it. Feels it's his birthright. I can imagine him getting elected and just saying, "Well, that's that then!" and staring out a window. To the extent I can wield Twitter influence, I prefer to function like a much cleaner, more honest super PAC.

Life Lesson of the Day

Lay Off The Schnapps And Look At These Cat Snaps