Giant Squid Filmed in Natural Habitat for the First Time 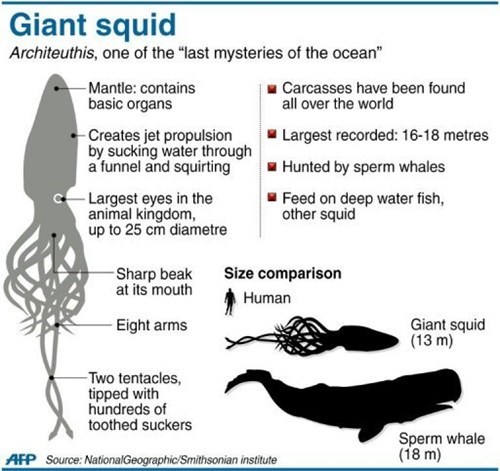 Last month a team of Japanese researchers announced that they had recorded live footage for the first time of a giant squid in its natural habitat, and today that footage has been released! Click here and scroll down for the video!

The researchers dove down to the watery, nightmarish depths of the Pacific in a cramped three-man submarine and lured the squid into the open with bait. The team then pursued the squid for about 270 meters, capturing footage of the (relatively small) three meter squid as it lazily cruised along. Museum researcher Tsunemi Kubodera described the giant squid as "shining and beautiful." Yours truly described the giant squid as "a Lovecraftian nightmare, but probably okay with some olive oil and garlic."

The expedition was partly funded by The Discovery Channel, and a documentary about the researchers' findings will air January 27. In the meantime we'll be doing our best to continue our excellent track record of 'Not Going In the Ocean'.