Challenge of the Day: Teens are Summoning a Mexican Demon Named ‘Charlie’

They may have moved on from controversial dresses and DIY lip enhancements, but now teenagers have a new craze to keep themselves busy: black magic.

A game similar to the Ouija Board called the “Charlie Charlie Challenge” has taken over Twitter, Instagram and Vine over the last few days, which has people using pencils to summon a Mexican demon that will answer any question you ask it.

So how does it work exactly?

First you place two pencils on top of each other in the shape of a cross creating four quadrants on a piece of paper.

Two of them are labeled “yes” and the other two are labelled “no.” 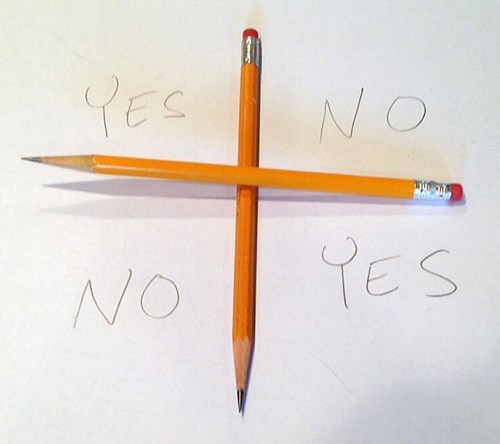 You must then recite the phrase “Charlie, Charlie, are you here,” (or “can we play”) and if the top pencil points towards “Yes” then – congratulations – you have successfully summoned a demon!

Charlie will answer any important life question you wish to ask, including which member of One Direction you’ll eventually marry.

Because apparently Mexican demons have a lot of free time on their hands.

All you have to do is change the options in the quadrants to whatever you wish to know. Just remember to say “Charlie Charlie can we stop” when you’re finished, or else you will leave a portal to Hell open inside your home.

An alternate version of the game involves two players each holding 3 pencils in the shape of a rectangle. If the pencils move up or in, it is considered a “yes” response, and if they move down or out, it’s a “no.”

Goofs and Blunders That Should Have People Rethinking Their Choices

News Cameraman Gets Food Poisoning at Old Folks Home, Films More Than He Bargained For

Lousy Interviewee Tries To Lie Their Way Into Job, Company Sees Through It

Entitled People With Their Bold Behavior and Audacious Demands

Barista Gets Revenge With 10 Syrup Pumps, Customer Loves It