Characters, Plot Unveiled for "The Cocoon of Destruction and Diancie" 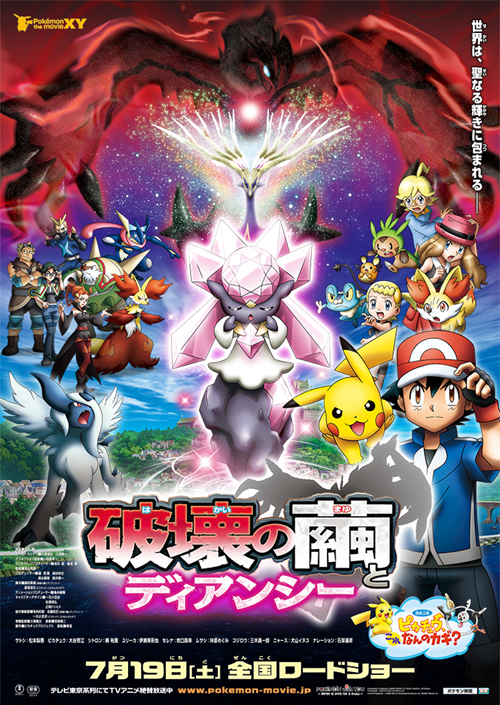 Information about characters that will appear in the 17th movie was unveiled on the official movie website. Several Carbink with different physical appearances will also be in the movie named Daii, Majima, Knight, and Joke. There will also be a Mega Absol, an unknown trainer, and their Mega Scizor.

Character descriptions:
Marilyn Flame - A beautiful female thief with her sights set on Diancie. Delphox is her partner.
Ninja Riot - A ninja thief that is after Diancie who hides his face with a mask. Greninja is his partner.
Argus Steel - Millis's father. Ownes a big plane. Likes chocolate.
Millis Steel - Argus's daughter. Saves Diancie when she is caught by Team Rocket. Chesnaught is her partner.

Movie storyline:
Diancie is the princess of the Country of Diamond Ore, which is the stage for this year's movie. The Country of Diamond Ore is a beautiful underground country, where many Jewel Pokémon Carbink live peacefully. And in the country is a huge diamond known as the Holy Diamond... The Holy Diamond is an important energy source that maintains the Ore Country, and has fulfilled this role for a long time. The Holy Diamond was created by Princess Diancie alone. However, she no longer has the power she once had. And... the time is near. The life of the Holy Diamond is almost exhausted. The beautiful Ore Country will be destroyed! But then, Diancie meets with Ash and Pikachu, and decides to leave on a journey to seek the holy powers of the Life Pokémon, Xerneas, in order to save her country. But on the way, the female thief Marilyn, the ninja thief Riot, and Team Rocket all attack them, seeking Diancie's power. With help from the parent-and-child Millis and Argus, the group manages to make it out of danger and continue their journey, but then they find the cocoon of the sleeping Destruction Pokémon Yveltal, which once annihilated all life in Kalos, blocking their way---

Is This Not How That Works?

Joe Biden's Got a Big Secret

The Apple Doesn't Fall Far From The Flank