Reason to Vote of the Day: “Shame” Will Get You To Vote

What does it take to get you to vote? Is it civic duty? A profound belief in a candidate? Fear of another candidate?

For almost half the American population, none of these things matter because they don’t vote. In fact, only about 56 percent of Americans voted in 2008. There are no numbers on this, but it’s entirely reasonable to think that maybe more people say “Thanks, Obama” than voted for him.

So what does it take? Money? Would you like money out of a candidate's pocket? Well, that’s not gonna happen, buddy! This is America! We don’t pay for votes here, so take it some place else.

But what about those celebrity videos? Can Stanley Tucci get you to vote?

via Save the Day

Sorry, Tucc. No. Celebrity videos where they guilt you into voting don’t work because they depend on the old theory of “rational self-interest,” i.e. the idea that people will vote based on heavily-reinforced social norms. People don’t operate based on “rational self interest,” do they? People say that they’re going to vote but, in many cases, don’t actually do it.

Over on YouTube, The Nerdwriter found something that just might work: shame. That’s right, if shamed into it, people will vote. He offers some different methods for implementing the age-old practice of shame, like a thing on Facebook that says “I Voted” or, the Scarlett Letter of the digital age, “I Didn’t Vote.”

Check out the video for some more facts about voter turnout. You will sound so smart next time the topic comes up if you do. 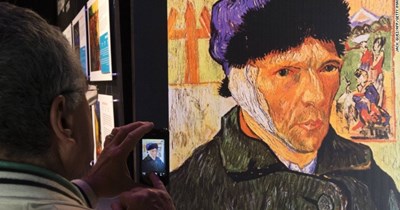 Fun Theory of the Day: Why Van Gogh Cut His Ear Off