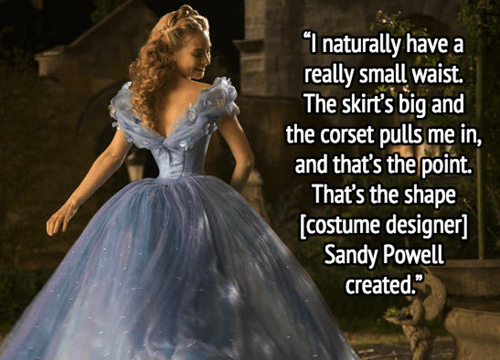 Cinderella herself, actress Lily James, has spoken out in defense of her tiny waist. 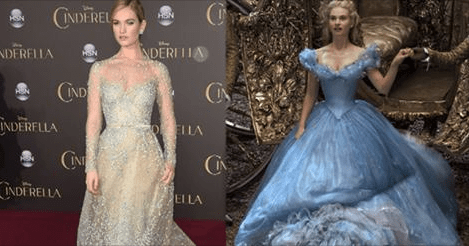 In an interview with the LA Times about the vocal critics and controversy surrounding her waist's appearance, James said:


I naturally have a really small waist.  The skirt’s big and the corset pulls me in, and that’s the point. That’s the shape [costume designer] Sandy Powell created.

I think it’s all very hypocritical, and they contradict themselves, and they’re drawing more attention to it. I think all that stuff’s so negative, and you’ve got to let it wash over your head.  I’m so healthy. I’ve got hips and boobs and a bum and a small waist.

Sure, it's a classic princess shape and she certainly does look the part, but James' body type is not one that many people possess.  Critics of the look stress that idealizing a body shape like Cinderella's can be damaging, especially to the young girls these fairy tales are aimed at.  Ultimately, we certainly shouldn't be shaming Lily James' body, but that doesn't mean the topic of body image isn't worth talking about, especially because she's admitted the corset didn't allow her to eat on set:

When [the corset] was on we would be on continuous days, so we wouldn't stop for lunch or a lovely tea like this. You'd be sort of eating on the move. In that case, I couldn't untie the corset. If you ate food it didn't really digest properly, and I'd be burping all afternoon in [Richard Madden's] face, and it was just really sort of unpleasant. I'd have soup so that I could still eat but it wouldn't get stuck.

You Clearly Know Nothing About Tea