Comedy of the Day: Louis CK Suprise-Releases a Comedy Album That You Can Buy for Whatever Price You Consider Appropriate 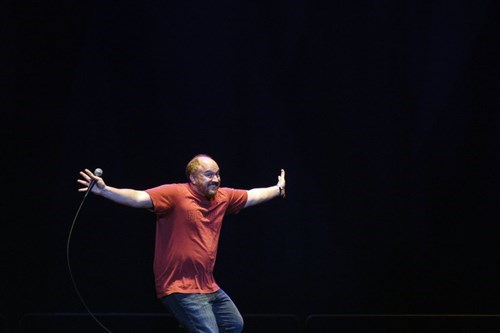 Continuing the trend he began of financing his own albums, then selling them for a cheap price on his own website, comedian Louis CK just released yet another one Aug. 8. This time it's a little bit different.

Louis CK: Live at Madison Square Garden is now available at his store and he's now letting those interested set their own price for the comedy.

Here's how he explains it:

Hi. This is a comedy album. It's the audio from my last of 3 shows that I performed at Madison Square Garden early this year. Some of the material is in the Comedy Store Special. Some of it isn't. But it's also a fun show on it's own. BUT since it's repeated material, I'm giving you the option to set your price anywhere from 1 dollar to 85. The default is $5. I hope you like it.

...Price: so I didn't know what to charge for this because a lot of the material was on my Comedy Store special and it was hard to get good sound because comedy is intimate and MSG is large, so there's a lot of sound slapping around everywhere though the sound engineer and the mixer did their level best. So we have the price set to 5 dollars but you can lower it to 1 dollar or raise it to 85. that's the maximum, because beyond that, I don't want your crazy money. Not for this show.

If you love his show Louie (and you should), you might think about shilling out the $1 for this album. He recently announced that he's taking an extended hiatus from the FX show to work on other projects, so who knows when we'll hear his stuff next.

Bio-Exorcist of the Day: Winona Ryder Says a Beetlejuice Sequel is Happening