Later Alligator of the Day: Toronto Man Pleads for Help When His 150 Reptiles Get Too Big 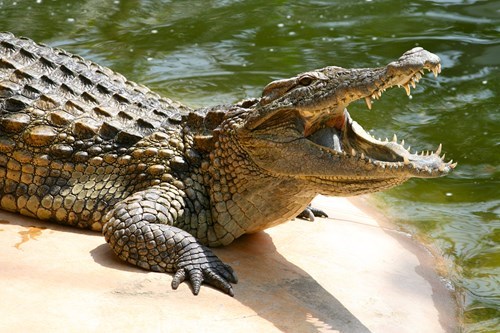 After awhile, crocodiles stop being fun to have as pets.

That's what one unidentified Toronto man discovered after he begged a local large reptile sanctuary to help remove some 150 alligators, crocodiles and caimans from his premises.

That's right. There were 150 of them. In Toronto, Canada.

The reptiles, some more than three metres long, had been kept in a home for about 10 years before Bry Loyst of the Indian River Reptile Zoo near Peterborough, Ont., was called in to help.

"I couldn't believe what I was seeing," Loyst said Thursday on CBC Radio's Metro Morning show. "I could not believe that somebody had that many crocodilians and raised them to adulthood. These were not baby little crocodiles," he said. "They were adults."

Even though that sanctuary wrangler would not give up the location of the house that kept such a large number of Captain Hook's nemeses, he did say it was in a residential part of the city and the crocs and gators were kept in aquariums.

So, you know. Real good neighbor-type.

Here's some CBC News footage of Loyst and crew collecting the reptiles:

90s Reboot of the Day: Will Smith Wants a Fresh Prince of Bel Air Reboot, Because That Decade Will Not Die