Royal Wedding Crashers of the Day 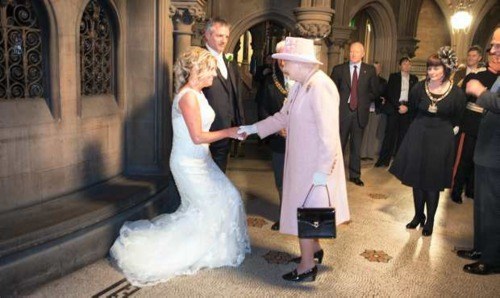 Newlyweds John and Frances Canning were informed a while back that a VIP would be at Manchester's town hall on the day of their wedding.

When later they learned that the very important person would be Queen Elizabeth II, they decided to send her a "lighthearted" invitation. They didn't expect to hear back from the Queen, much less see her at their wedding.

But that's exactly what happened.

"When we had our ceremony, the staff asked us to wait for a moment in the corridor and just a few minutes later the queen arrived," Frances Canning told the Manchester Evening News. "She knew both our names and apparently we had been especially added to her rota."

Mr. Canning said the monarch congratulated them and asked them how they were feeling, while her husband inquired about their Italian honeymoon plans.

The Queen and Prince Philip were in town as part of HRH's Diamond Jubilee tour.

In related royal news, a significant number of MPs from all three major parties have proposed renaming Big Ben in honor of the Queen on the year of her Diamond Jubilee. The proposal is gaining traction after being backed by Deputy Prime Minister Nick Clegg, Labour leader Ed Miliband, London Mayor Boris Johnson, and even Prime Minister David Cameron.

Zoolander IRL of the Day