Movie Theater Ninjas of the Day 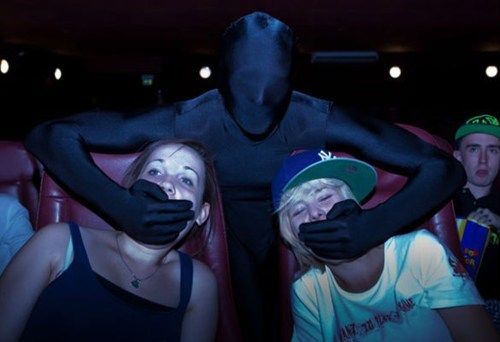 When it came to inconsiderate movie-goers, Prince Charles Cinema in the U.K. had had enough -- so it launched an army of volunteer "cinema ninjas" who wear black body suits and pounce on chatty moviegoers in exchange for free movie passes.

The ninjas have been so successful that two other theaters have followed suit.

I normally hate noisy people in cinemas, but I got a call from my friend just as the movie started and thought I could get away with taking it. The last thing I expected was two completely blacked-out people suddenly appearing by our seats and give me and my mates a warning to shut up. It was actually pretty terrifying at first, but then I realised it was a bit of a laugh and a great way to make it clear what I was doing was having an impact on those around me. It certainly made me hang up and shut up for the rest of the film.

22 Times Parents Did The Darndest Things