Colonel Meow Talks To The Daily What of the Day

Today marks one week since Colonel Meow made his debut on The Daily What. Since then, the Colonel's grumpy likeness has taken the Internet by storm -- including features on Yahoo and MSN -- and his Facebook page has grown from 166 "likes" to more than 17,000.

We tracked down the newly famous feline phenomenon and his master, Anne Marie Avey, for a photo op and interview at the Cheezburger offices, aka LOLcat Headquarters.

Colonel Meow arrived nestled in a baby bjorn. All fur and frowns, he patiently posed for 20 minutes of pouty-faced pics before we got down to business:

The Daily What: How has your life changed since Colonel Meow went viral?

Anne Marie Avey: (Laughs.) Before, I would talk about my cat, and people were like, "Who cares?" ... And now I feel validated because people understand me. And I'm happy to give him a voice. Even if that voice is one that is grumpy.

TDW: Does he ever look not frowny?

AMA: Nope. That's not an option. But then in the morning he's staring at you, and you're like, "Holy sh-t! OK, you're happy right now."

TDW: Speaking of frowning, you and the Colonel held a frowning contest for his Facebook fans.

AMA: That was awesome. But I had to be more specific. The first girl that sent in her frown pic, it was a t-tty pic.

TDW: Is this taking over your life?

AMA: YES. I was bartending this weekend and some guy goes, "Congratulations on the front page of Reddit!" The guy next to him looks at me and goes, "Colonel Meow? That's your cat?" Random people in my bar know about him!

TDW: What's next for you and the Colonel?

AMA: We're going to L.A. in December, and I'm marching into Ellen with Colonel Meow, and she'll have two options: hire me, or hire Colonel Meow. She has to say yes to one of us!

TDW: Does the Colonel have anything to add?

AMA: He would be nothing without his minions. 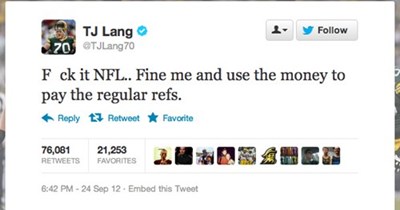 Saying What We're All Thinking: NFL Edition of the Day