Meanwhile in China of the Day 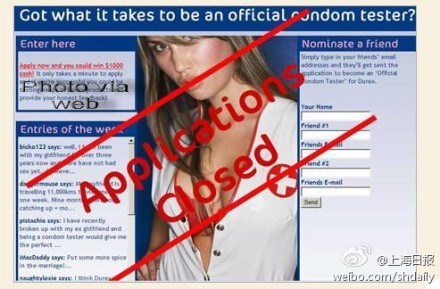 An online classified ad offering Shanghai women as much as 3,000 yuan ($588) per day to "test condoms" while having sexual activity with men was removed from Baixing.com, the Chinese equivalent of Craigslist, after netizens on Weibo began speculating that it could be a recruiting advertisement for prostitution. According to the Youth Daily's interview with an employee of the condom manufacturing company, normally machines are used to test condoms but the firm can't afford to buy as many as they would need. On a side note, human condom testing has been offered as a job in other parts of the world.

Meanwhile in (X) of the Day is a feature series bringing you the latest buzz from all over the continents with a special focus on non-English speaking parts of the world.

Shut Up and Take My Money of the Day: Lifelike Robofish

WTF of the Day: Woman Blinds Herself Because She Felt it was 'Who She was Supposed to Be'