Philanthropy of the Day: Bill Gates was Secret Santa for One Lucky Redditor 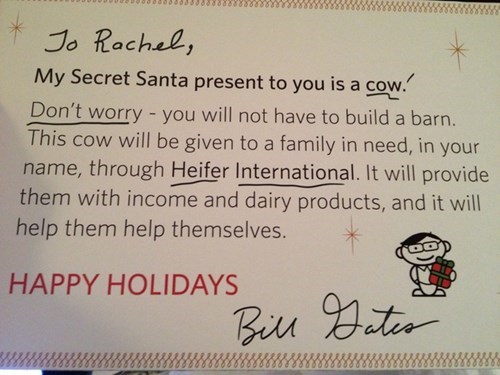 Redditor Rachel received a rather modest gift of a stuffed toy cow from a Reddit Secret Santa participant simply named Bill. Rachel wrote on Reddit: "Quite frankly I felt bad for this 'Bill' since I'm a self identified pain in the ass to shop for."


It wasn't until she opened the card that she realized the true identity of the gift giver; it was Bill Gates. The stuffed cow symbolized a donation given to Heifer International on Rachel's behalf. The organization "gives families in need the right tools—such as animals, seeds, clean water, safe stoves or a chance for girls to go to school.

Meanwhile in India of the Day: Morgan Freeman Mistaken for Nelson Mandela on Billbaord