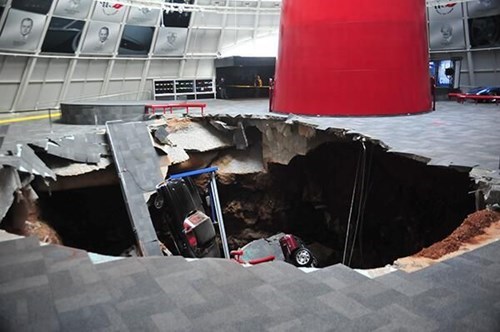 A sinkhole has developed at the Corvette Museum in Bowling Green. 8 cars so far in it pic.twitter.com/3NpFNii13f

A 40 foot sinkhole opened up early this morning at the National Corvette Museum in Bowling Green, KY.


The damaged cars include a 1993 ZR-1 Spyder and a 2009 ZR-1 "Blue Devil" both on loan from General Motors; the Blue Devil was so named for the alma mater of then-GM CEO Rick Wagoner, Duke, as company staff tried to sway him to approve the ultra-high performance model. Also damaged were a 1962 Black Corvette, 1984 PPG Pace Car, 1993 Ruby Red 40th Anniversary Corvette, and 2001 Mallett Hammer Z06 Corvette, all owned by the museum, as well as the 1 millionth Corvette produced from 1992 and the 1.5 millionth from 2009.

Staff removed one car, an irreplaceable 1983 Corvette, but are leaving the other cars in the Sky Dome until the structure has been assessed.

Sportscaster of the Day: Watch Dale Hansen's Great Commentary About Michael Sam. We Need More People Like This.