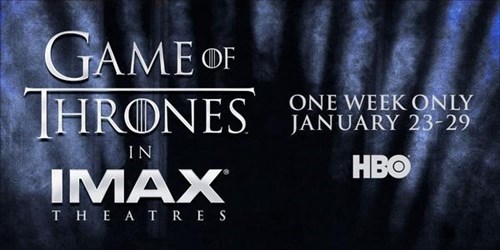 If you can't wait until April for your next trip to Westeros, or you just really want to see [SPOILER] and [SPOILER] from the last two episodes in IMAX, this one's for you.

For one week later this month, 150 IMAX theaters across the US will be showing the last two episodes of season four along with an exclusive trailer for season five.  This event will mark the first time a tv series has been shown in IMAX.  Meanwhile, HBO has not confirmed an official start date for next season, but it should still be coming some time in April.  The IMAX event is scheduled for January because there's literally nothing else worth playing in IMAX: "Blockbuster productions rarely are released in January, giving Imax some flexibility in scheduling an experiment. 'It would be difficult to bump 'Avengers' or 'Star Wars' or 'Bond' to do something like this, but in late January, you have a lot more flexibility.'" (NYTimes)

Are you interested in seeing 70 foot tall Game of Thrones?

Even If You're not a Fan of MLP, You Have to Admit the Theme Song Sounds Pretty Rad When Played by an Orchestra
Comments - Click to show - Click to hide

What Are You Looking At?

Hard to Argue With That Logic