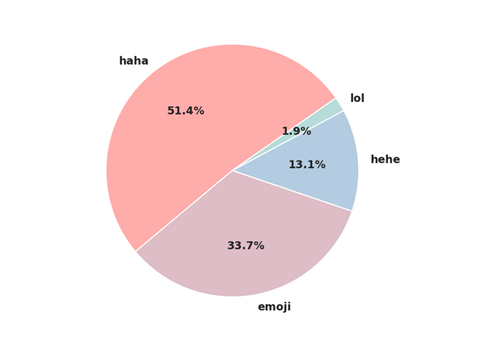 Inspired by an New Yorker article on expressing laughter, Facebook decided to see how it's billions of users choose to show their laughter.

While you would expect that 'lol' would take the cackling cake, because it was burned into our collective brains through insipid over-use during Internet's 2.0 days, it turns out those three terrible letters are on the decline. Facebook ran their analytic numbers and gave us several graphs to plot out how America chuckles online.

[W]hy rely on anecdotes when you have data? We analyzed de-identified posts and comments posted on Facebook in the last week of May with at least one string of characters matching laughter1. We did the matching with regular expressions which automatically identified laughter in the text, including variants of haha, hehe, emoji, and lol2.

As denizens of the Internet will know, laughter is quite common: 15% of people included laughter in a post or comment that week. The most common laugh is haha, followed by various emoji and hehe. Age, gender and geographic location play a role in laughter type and length: young people and women prefer emoji, whereas men prefer longer hehes. People in Chicago and New York prefer emoji, while Seattle and San Francisco prefer hahas.

Here's an overall usage of the four most common types of e-laughs:

If you're a maps person, here's a state by state break down:

Of course, the data is pretty compacted. There's no mention of 'lolz', 'lawlz' or even 'lololololololol'. Not to mention 'huehuehue'.

How do you laugh online as a digital expression with no inherent humanity?

Shaming of the Day: Montreal Throws Beer and Insults in Roosh V's Face