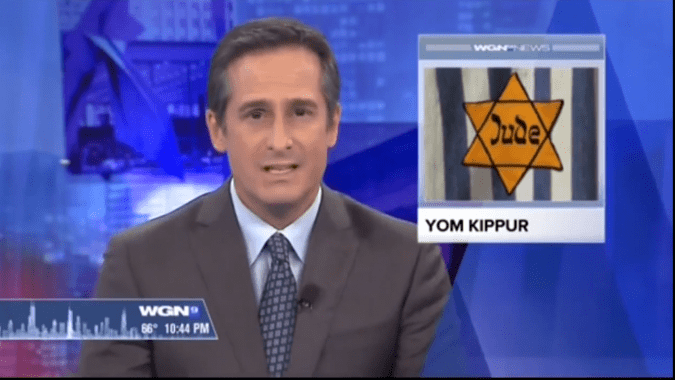 Well that's not the best way to wish Jewish people a respectful and reverent holiest of holy days...

Yom Kippur began Sept. 22 at sundown and while many people struggled to begin their fast local Chicago news station WGN had a pretty hard time of it as well.

In their broadcast drawing attention to the day they used the image above. While they probably thought it was a harmless Star of David, in actuality it was the Yellow Badge, which Nazis made mandatory for Jewish people to wear during the Holocaust.

WGN posted an apology to their Facebook page shortly after the incident.

We are extremely embarrassed and we deeply apologize to our viewers and to the Jewish community for this mistake.

Ignorance is not an excuse.

Please know we are reviewing our in house policies and changes have already been made to make sure a hurtful oversight like this never happens again.

Oh My F*ckin' Gawd of the Day: Most Boston Man Ever Loses His F*ckin' Mind Over This F*ckin' Fish Right Here, Bro