Cold One of the Day: Grandfather Cracks Open 32-Year-Old Beer After Cubs Win the World Series 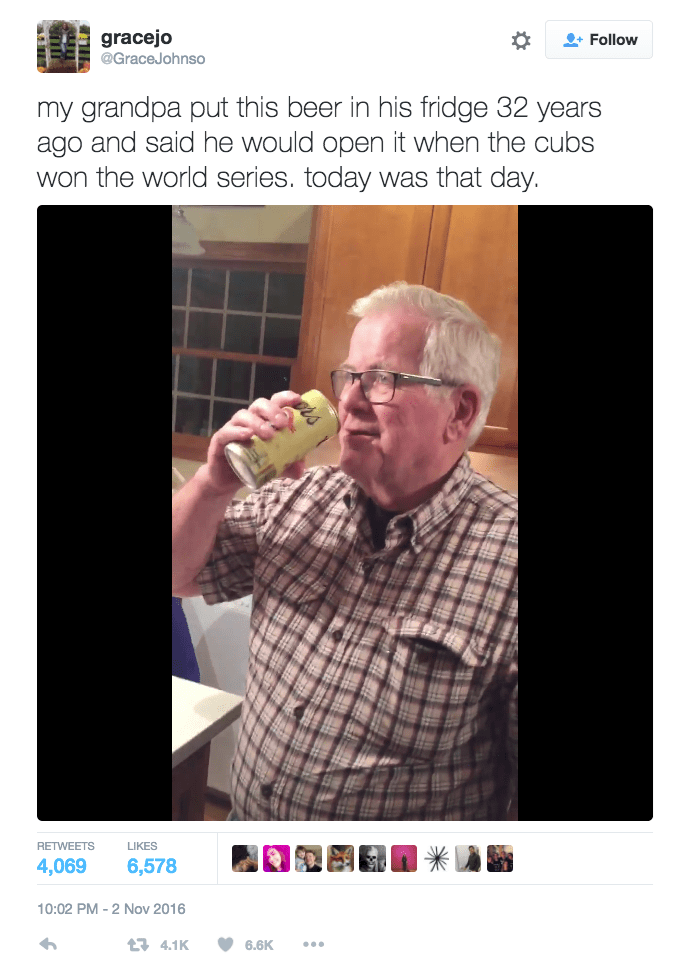 my grandpa put this beer in his fridge 32 years ago and said he would open it when the cubs won the world series. today was that day. pic.twitter.com/LPsNMQZCpp

It's been a big night for Cubs fans, who ended a 108-year losing streak to win the World Series against the Cleveland Indians. They're probably thirsty. Thirsty for old beer, that is.

Ending a streak of his own, this grandfather finally opened a beer that he put in the fridge 32 years ago with a mental note "slam this bad boy when the Cubs win the the World Series." Let's just say, nothing makes a man thristier than their team winning the Fall Classic — thirstier for old beer, that is.

The chickens came home to roost — or the Cubs came home to roost or something —  last night, and he popped the top on this three-decade old Coors Banquet. Complete with pull-style tab can, the beer in question does not even fizz when he pours it into his proud Cubs mug. Reports say that the beer "smells like hell" and probably shouldn't be drunk.

The family heard those reports, too. It smelled so bad that they wouldn't even let him drink it. After all, why would anyone want to celebrate a World Series win — more than a century in the making — in the emergency room because their grandfather was so thirsty for old beer.

Be a winner, like the Cubs: Don't drink 30-year-old beer.

Funeral of the Day: Dublin Man's Ashes Turned into Fireworks for Halloween Celebration

Manly Memes For Boys Who Just Wanna Have Fun Too