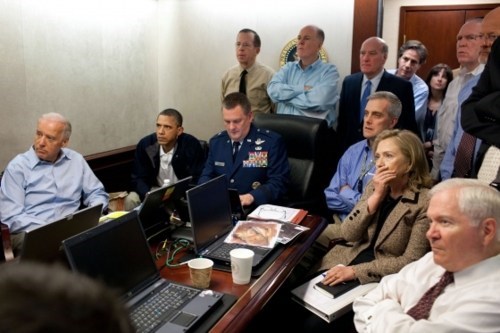 To mark the one-year anniversary of the American raid in Pakistan that killed Osama Bin Laden, President Obama traveled unannounced and under the cover of night to Afghanistan, where he signed a strategic partnership agreement with President Hamid Karzai. The agreement will broadly govern the U.S. role in Afghanistan once the American combat mission stops at the end of 2014 -- 13 years after it began.

Translation: Obama's surprise visit to Afghanistan is intended to remind everyone that HE ORDERED THE BIN LADEN RAID, and that the beginning of the end of the war in Afghanistan HAPPENED ON HIS WATCH.

Obama will address the American people live from Afghanistan at 7 p.m. ET.

UPDATE: In his address, Obama said that there will be no permanent bases in Afghanistan, and the Afghan people will be responsible for their own security and infrastructure.

Last year, we removed 10,000 U.S. troops from Afghanistan. Another 23,000 will leave by the end of the summer. After that, reductions will continue at a steady pace, with more of our troops coming home. And as our coalition agreed, by the end of 2014 the Afghans will be fully responsible for the security of their country.