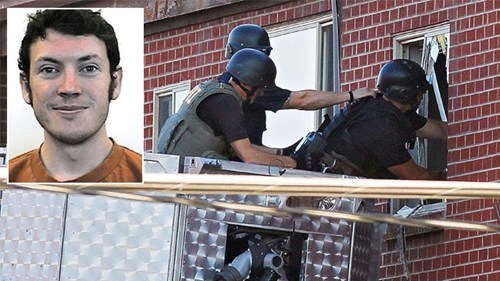 A masked gunman identified as 24-year-old James Holmes, armed with a rifle, a shotgun, and two handguns, entered a theater outside Denver, CO, this morning just minutes after the 12:05 a.m. premiere of The Dark Knight Rises began, killing at least 12 people and wounding at least 71.

A witness said Holmes entered the Aurora theater through the emergency exit, "threw a canister across the theater," unleashing gas, "then started shooting." Another witness said movie-goers were confused; they thought the sound of gunfire was from the movie.

We were maybe 20 or 30 minutes into the movie and all you hear, first you smell smoke, everybody thought it was fireworks or something like that, and then you just see people dropping and the gunshots are constant. I heard at least 20 to 30 rounds within that minute or two.

Holmes was arrested outside the theater. Officials are searching his apartment, which is "booby-trapped" with "very sophisticated" explosives.

Holmes had no history with police other than a speeding ticket. He went to high school in San Diego; he was studying medicine at the University of Colorado Denver but withdrew last month. Two of the medical school's facilities have been closed.

Here's what we know:

Before He Was Jesse Pinkman of the Day

WTF of the Day: Woman Blinds Herself Because She Felt it was 'Who She was Supposed to Be'