This Guy Lost His LoL Match By Teleporting to His Death Not Once, But Twice

In his semifinal match against Doublelift, LoL player Froggen decided to deploy Mark, which is a spell that, if it hits, allows you to Dash directly to your opponent. Unfortunately for him, Doublelift was in the process of teleporting to safety when he started his Dash, so Froggen darted directly to his death.

Froggen asked for a rematch, and promptly screwed it up again with the same mistake.

After another rematch, Doublelift won and Froggen was left to deal with his wounded pride. 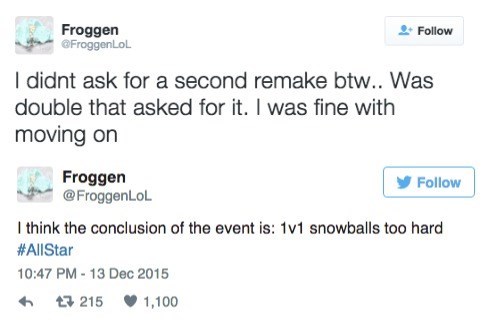 17 Times Keanu Reeves Delighted Us With His Wholesome Presence

30 Memes About The Mundane Obstacles Of Everyday Life