OfficeMax Sent a Letter to a Man and His Daughter Who Was Killed in a Car Crash, Addresses Daughter as "Daughter Killed in Car Crash" 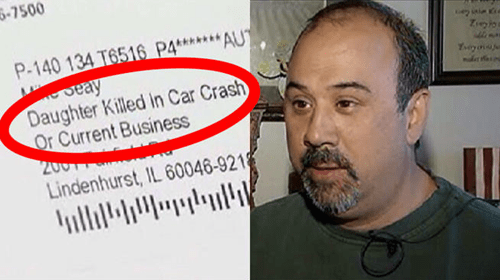 Dude, OfficeMax... are you serious?

Mike Seay from Chicago, IL lost his 17-year-old, Ashley, in a car accident last year. On January 16 of this year, Seay and his wife received some junkmail from OfficeMax. However, instead of the second recipient on the envelope being "Ashley Seay," it was printed as "Daughter Killed in Car Crash."

OfficeMax was quick to start damage control, stating that the printed name was an "inadvertant error" made by one of their third-party mailing services.

Hold on a minute. Inadvertant error? How is that inadvertant? Somebody had to have realized Ashley Seay has passed away, and then made the conscious decision to print "Daughter Killed in Car Crash" on the envelope.

OfficeMax's had this to say about the incident:

"We are deeply sorry that Mr. Seay and his family received this mailing from us, and we are reaching out to Mr. Seay to convey our sincerest apologies on this unfortunate matter. This mailing is a result of a mailing list rented through a third-party provider. We have reached out to the third-party mailing list provider to research what happened. Based on a preliminary investigation today we believe this to be an inadvertent error; and we are continuing the investigation." Posted by stephenwood51
and 6 more...

Labor Day: When We Don't Have to Curse to Relieve Stress
Comments - Click to show - Click to hide