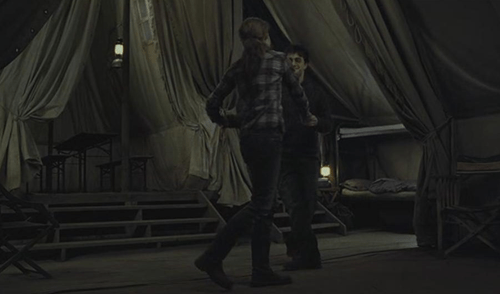 If you're looking to taunt more Ron/Hermione shippers, you can read the full interview between Rowling and Watson in Wonderland magazine here. You'll be treated to more revelations like this one:

In some ways Hermione and Harry are a better fit and I'll tell you something very strange. When I wrote Hallows, I felt this quite strongly when I had Hermione and Harry together in the tent! I hadn't told [Steve] Kloves that and when he wrote the script he felt exactly the same thing at exactly the same point... And actually I liked that scene in the film, because it was articulating something I hadn't said but I had felt. I really liked it and I thought that it was right. I think you do feel the ghost of what could have been in that scene.

Even though Rowling regrets putting Ron and Hermione together, there's hope for them yet. She says, "They'll probably be fine. He needs to work on his self-esteem issues and she needs to work on being a little less critical."

Well, I for one can never unsee what should have been in that tent scene.

Spicy Star Wars Memes That Are More Fun Than The Prequels

Don't Trust That One Bit

6 Minutes of Game Of Throne Memes