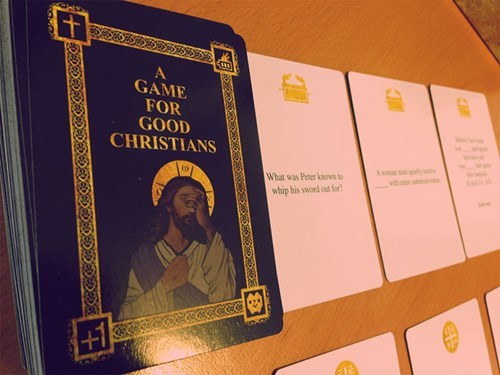 The game features both out of context quotes directly from the Bible as well as punched-up entendres based on real scripture (IE: "A fiery bush" or "A rainbow promising that God can genocide you through other means"). The creators didn't intend the game to be a satire or a wink-nudge parody of faith, but rather just a funny, bizarro take on well-known scripture - and the most awkward family gathering conversation starter.

This Wedding Cake Features Projections of Your Favorite Games. No, Seriously.
Comments - Click to show - Click to hide

Misfortune Monday: We Gotta Roll With It

Funny Tweets And Tumblr Gems To Kick Boredom In The Groin