There's a Site That Allows You to Anonymously Ship Your Enemies the Most Vile Substance Known to Man: Glitter 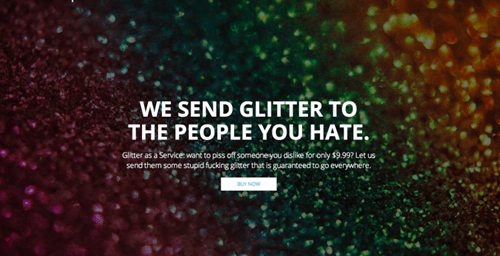 A new service called "ShipYourEnemiesGlitter.com" launched (and crashed) this week, offering to enact revenge for you by sending packets of glitter and a note to anyone you dislike.

The company says their hatred of glitter (i.e the "herpes of the craft world") is what inspired them to start the service, because it's nearly impossible to clean up.

It costs $9.99 Australian dollars (or about $8.15 in the United States), and anyone who wants to use the service just fills out a short form with the contact info for whomever they want to glitter bomb.

They will then "vomit up a tonne of glitter" and send it to your arch nemesis.

"There's someone in your life right now who you fucking hate," they write on the site. "Whether it be your shitty neighbour, a family member or that b*tch Amy down the road who thinks it's cool to invite you to High Tea but not provide any weed."

ShipYourEnemiesGlitter.com was bombarded this week with requests after Monday's launch, and it says that purchases are temporarily suspended as a result.

Slate interviewed the founder, a 22-year-old internet marketer from Australia named Mathew Carpenter, who says the response was overwhelming.

"Over 2,000 of the world's brightest people have spent money on this service," he said. "It's good for business, but bad for society."

Posted by ichc.chrispeeler
and 38 more...

Tumblr Post: Brother Learns Lesson In Not Irritating The Chef

People Who Proved They Weren't The Dumb One

People Who Proved They Weren't The Dumb One