Putin of the Day: For His Birthday, the Russian President Played Hockey and Scored 7 Goals 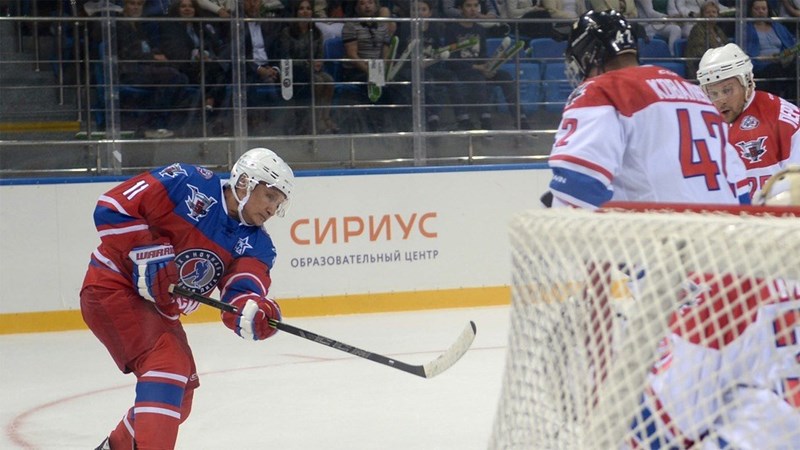 Ah, you're Putin me on with this one.

For his Oct. 7 birthday, the President of the Russian Federation strapped on his skates and took to the ice like a tyrannical zamboni. Vladamir Putin played against NHL stars in Socci and scored a whopping seven goals, leading his team to a 15-10 victory.

The event kicked off the fifth season of Russia's Night Hockey League, and saw Putin playing alongside international hockey legends like Pavel Bure and Vladimir Lutchenko. His team took home victory, beating their opponents 15 to 10.

The opposing team included Defense Minister Sergei Shoigu as well as Putin's close friends — tycoons Gennady Timchenko and Arkady Rotenberg. Both were slapped with Western sanctions last year for their ties to Putin in the wake of Russia's annexation of Crimea.

But Putin was undoubtedly the star of the show, and event went home with a trophy for his team's win at the end and a medal for his contribution to hockey in Russia.

There's no reason at all to question Putin's ability to score seven goals playing against hockey legends.

This isn't the first time, he's shown such amazing prowess in three periods of play. Just last May, Putin bested his birthday score, by putting eight pucks into the net.

Truly the world of hockey is missing out on a player that would eclipse the great Gretzky.

Princess of the Day: Disney Reveals the Voice and Look of Moana's Main Character