People Are Having a Blast Finishing Donald Trump's Tweets 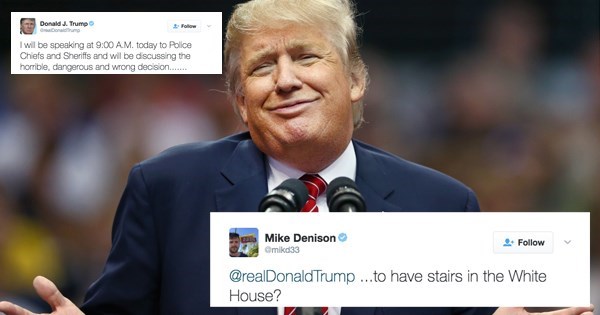 The president of being a reality-TV gameshow host and also the United States of America is having a hard time getting his Muslim Ban through — mostly becuase it's unconstitutional. And like a person who didn't like the service at their local Denny's, he's tweeting about it.

However, unlike someone who didn't like their All-American Slam Burger, tweeting about issues like a racist travel ban requires more than 140 characters. So he got cut off in the middle of this tweet:

I will be speaking at 9:00 A.M. today to Police Chiefs and Sheriffs and will be discussing the horrible, dangerous and wrong decision.......

So people are finishing the tweet for him, and honestly, I wish this would happen more often. It's very funny.

@realDonaldTrump ...to have stairs in the White House?

@matthaig1 @JordanUhl @mikd33 maybe to claim that Russia and America are morally equivalent.

@mikd33 @realDonaldTrump to have doors that lead to exits pic.twitter.com/4J6vhnEVmA

@mikd33 @realDonaldTrump to hide the light switch right by the door?