The Happiest Place on GET BACK TO WORK 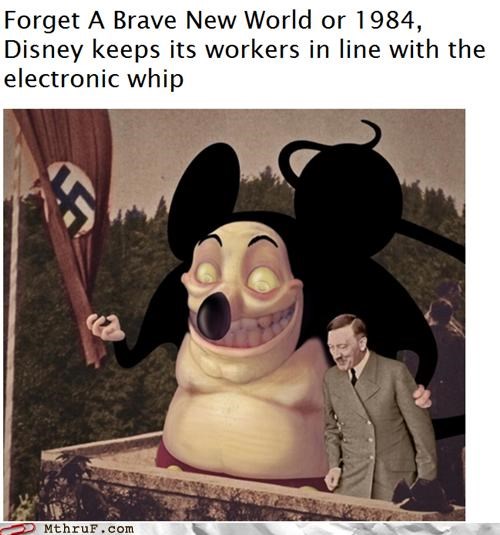 Via I Heart Chaos
Repost
Recaption

Reports are coming in that one of the major Disney hotels in Anaheim California has begun to impose some, how do you say, Draconian methods in making sure that their employees keep up with the daily quota of room cleanings and daily maintenance rounds. Steve Lopez writes in the LA Times:

Employees in the Anaheim hotels are required to key in their ID when they arrive, and from then on, their production speed is displayed for all to see. For instance, the monitor might show that S. Lopez is working at an efficiency rate of 37% of expected production. The screen displays the names of several coworkers at once, with "efficiency" numbers in green for those near or above 100% of the expected pace, and red numbers for those who aren't as fast. At Paradise Pier, hanging under the monitor is a framed picture ofMickey Mouse on a lunch break at a factory. Judging by his smile, I'd bet his factory doesn't have an electronic whip. According to Barrera, the whip has led to a sort of competition among workers, some of whom have tried to race to the head of the pack. But that has led to dissension and made other employees worry that a reasonable pace won't be enough to keep the boss happy. Barrera and Beatriz Topete, an official with Unite Here Local 11, said employees have been known to skip bathroom breaks out of fear that their production will fall and managers will demand an explanation. They say they felt bad for a pregnant employee who had trouble keeping up.

What do you think, fellow office lackeys? Is this going one step too far, the logical outcome of corporate thinking, or what? Maybe you have some of your own terrible work conditions to share? Let us know in the comments.

Posted by ichc.chrispeeler
and 22 more...

Misfortune Monday: We Gotta Roll With It