Remember how horrible Sonic looked in the first iteration of 2020's Sonic the Hedgehog? Well, thanks to some leaked images from the Sonic 2 set, we're happy to report that it seems we're avoiding similar cursed aesthetics in Sonic the Hedgehog 2. More importantly? Knuckles is along for the ride.

We've known since February that Tails would be joining our favorite hedgehog for his movie's sequel, but people are now celebrating that Knuckles the Echidna will be along for the ride as well. Sonic's rival has been a fan favorite since the character's debut in 1994, and has also become a meme in his own right. Remember Ugandan Knuckles? Leaked photos reveal that Knuckles will be looking much, much better than the VR chat avatar, and much, much better than the cursed Sonic we've tried to erase from our collective memory. You can see the photos - and some thrilled reactions below. But don't get too excited. The movie won't be in theaters until April 8, 2022. They've got plenty of time to screw this up. 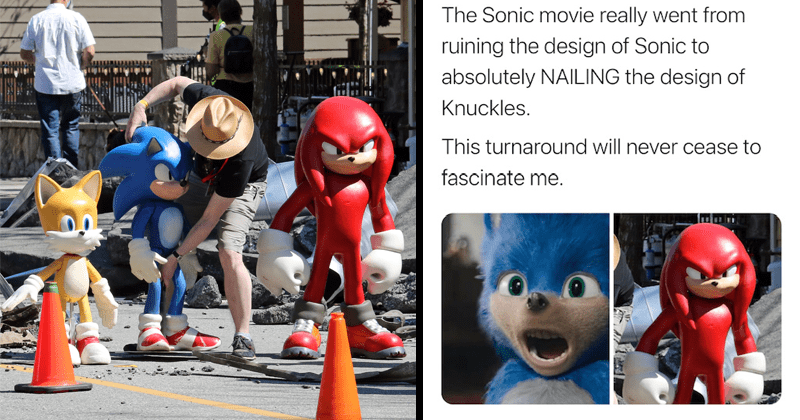 Guy Fieri is a lot of things: television personality, human shot of Fireball whiskey, father, fashion icon. But perhaps most importantly, the spiky-haired, walking Ed Hardy advertisement is one hell of a meme. We've rounded up the best Guy Fieri memes of all time. So get in this car. We're going to Flavortown. 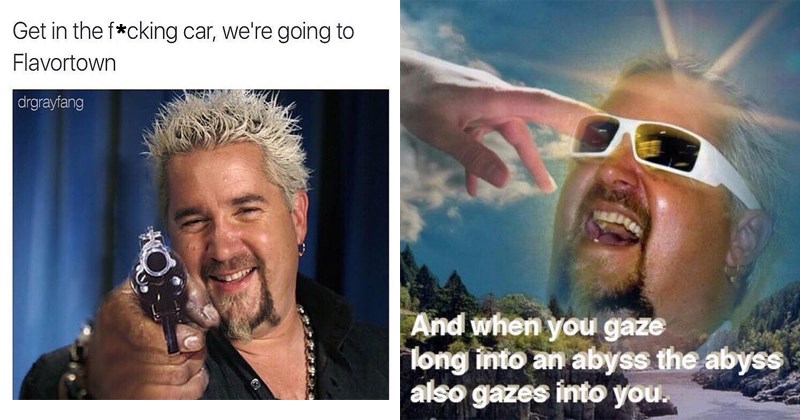 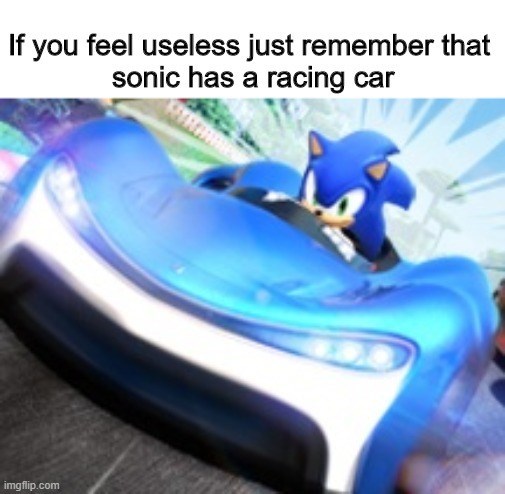 It seems like a decade ago that we were lamenting the Sonic movie's terrible animation. Even the movie's February 14 release seems like it happened in another lifetime. But the film (which actually got solid reviews) has more to offer than 100 minutes of boredom-busting. It's inspired more than a few excellent dank memes, and the latest format features Jim Carrey as Sonic's nemesis, Robotnik. The meme remixes the classic Daily Struggle format by adding a panel of Robotnik eagerly selecting the negative red button. It's being used to mock everyone from gullible fake-news spreading aunts to gamers, and it's quickly becoming one of the more popular formats on Reddit. We've put together a healthy handful of our favorite examples, but you can read more about the evil goodness on Know Your Meme. Happy scrolling! 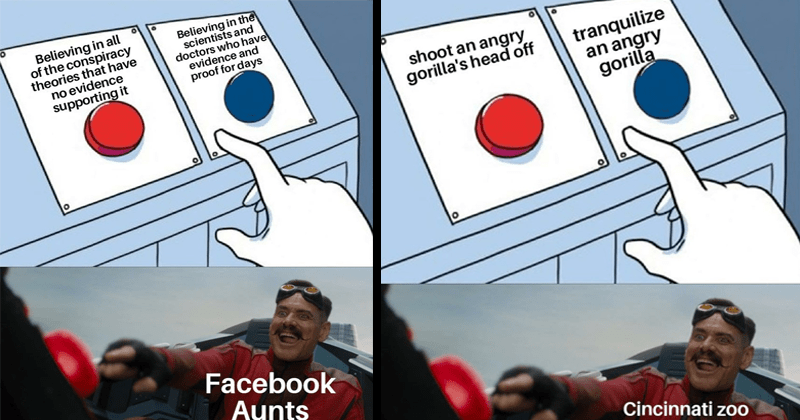 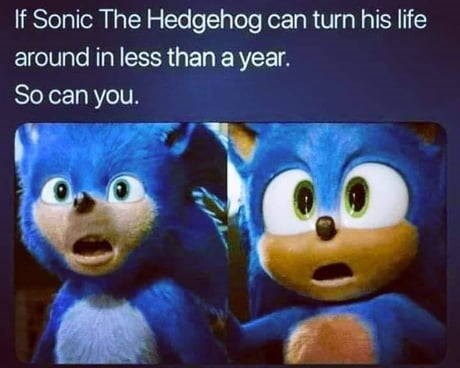 Via I waste so much time
Repost
Recaption
I Can Has Cheezburger?
Favorite

Dreams really do come true! Bandit the hedgehog was able to see her idol -- Sonic -- on the big screen!

Twitter user Jake & Bandit, shared adorable pics of Bandit right beside the Sonic cardboard cutouts! The tweet obviously went viral because who wouldn't want to see a hedgehog posing with Sonic the Hedgehog? Everyone wants to see that!

The tweet also sparked some other users to share pics of their adorable hedgehogs! So, all in all, we say this was an excellent thread. 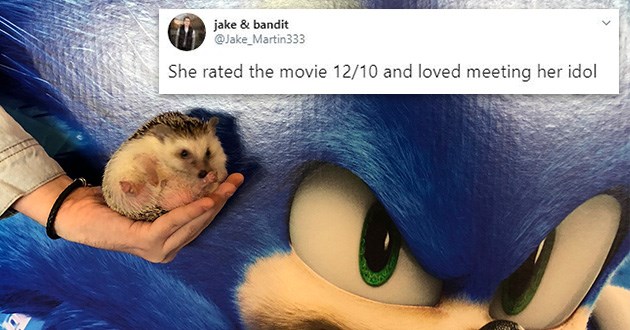 One of our favorite memes is "They Had Us In The First Half," so we were extra excited to see this similar dank meme from the Sonic the Hedgehog movie featuring Jim Carrey as Dr. Robotnik uttering the line, "I was not expecting that."

Scroll down for some of our favorites and check out Know Your Meme for more examples! 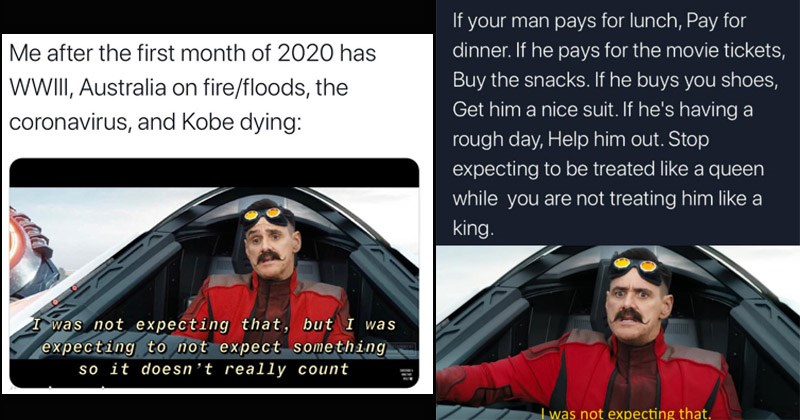 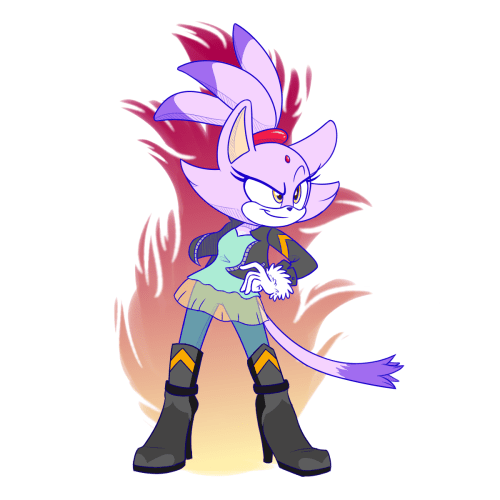 Blaze the Cat is Sunset Shimmer's wish fulfillment fursona, thanks for coming to my TED Talk.

Viral Video Of Sonic Cake Is Cute And Sinister

What starts out as a cute video of an awesome Sonic the Hedgehog cake from @sugarhighscore, quickly turns into a strange and sinister display of Sonic's face being torn into. 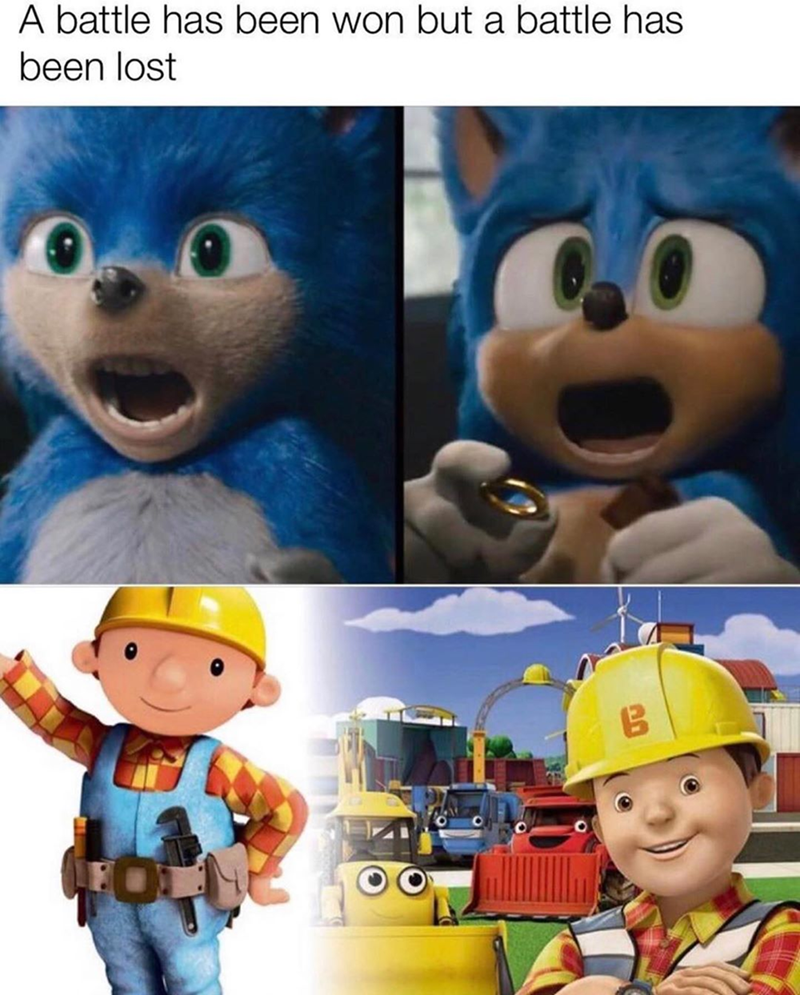 Why is nobody talking about this? Bob the Builder needs our help!

'Sonic Pointing At Sonic' Memes Are Taking Over Reddit

We've been talking a lot about the Sonic the Hedgehog redesign, which has been a huge relief for fans of the blue critter. Since Paramount Pictures released their new trailer, redditors have been meme-ing bits of footage and they show no signs of stopping. The latest format to pop off utilizes a photoshopped scene featuring the new Sonic pointing sheepishly at the much-hated previous version of himself. It's become a popular way to make "Get a load of this guy" jokes about crap that's cringeyand embarrassing. The format is extremely versatile, and while it lends itself to low-effort memery, many of them are pretty damn hilarious. 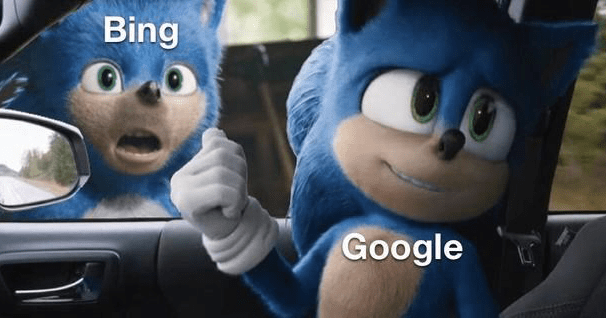 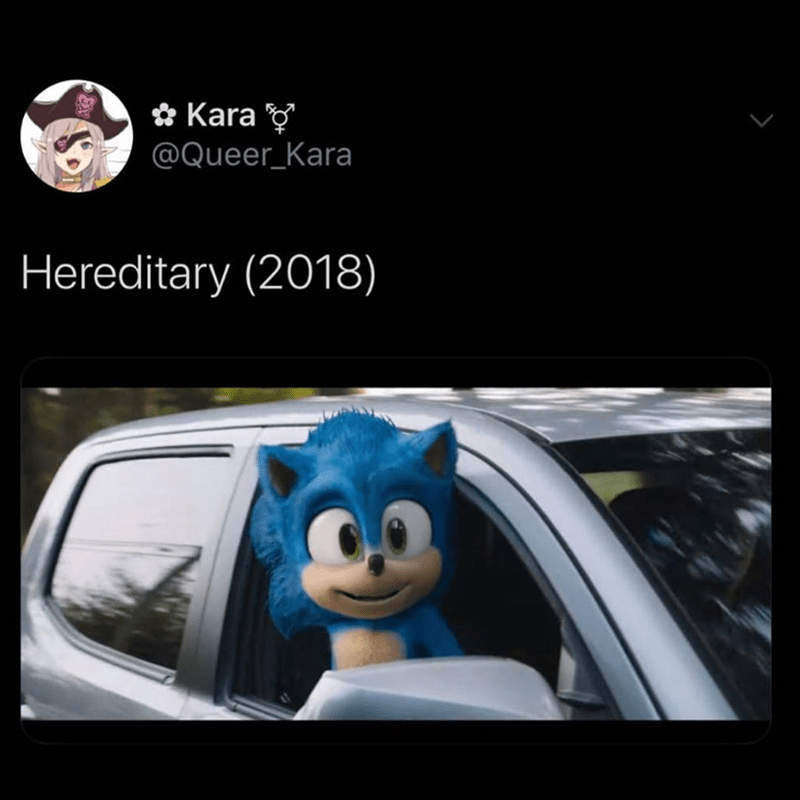 While Hereditary f*cked us up, this Sonic movie might do even worse.

Bunch Of Random Memes That Don't Require A High IQ

We know you've had a long, stressful week so we're trying to make it a little easier for you by delivering entertainment that doesn't require any intelligence or brain power whatsoever! 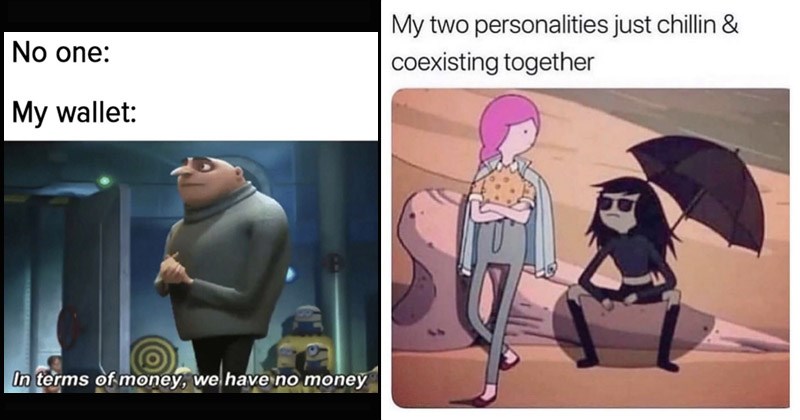 'How Are You Not Dead' Is A Death-Defying 'Sonic' Meme

As you're probably aware by now, memers are positively freaking out about the Sonic movie redesign, and we can't really blame them. Was the whole thing a conspiracy in order to generate more publicity? We're inclined to say yes, but that's a whole other topic entirely.

For now, please enjoy these dank memes entitled, "How Are You Not Dead?" 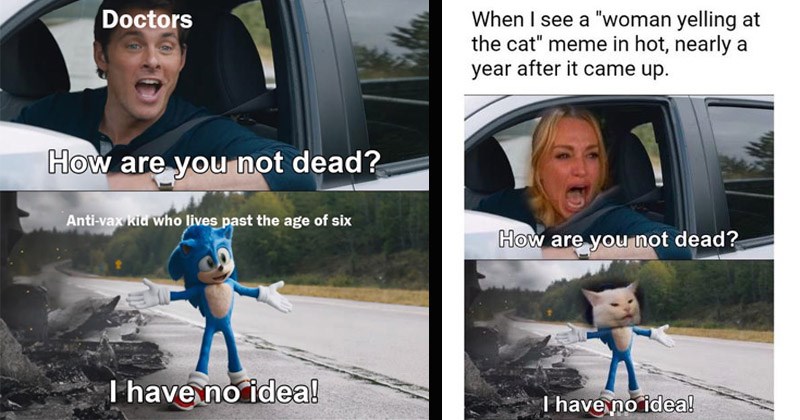 The new and greatly improved trailer for Sonic the Hedgehog was released this morning, and people all over the world are breathing a collective sigh of relief. While people on Twitter shower Paramount with written praise, redditors are reacting the only way they know how - with deliciously dank Sonic memes. Since the trailer's release, r/dankmemes has been slowly overflowing with memes from the trailer, and about the trailer. We're not sure which we like best. But here's a bunch that really spoke to us so you can help us judge. 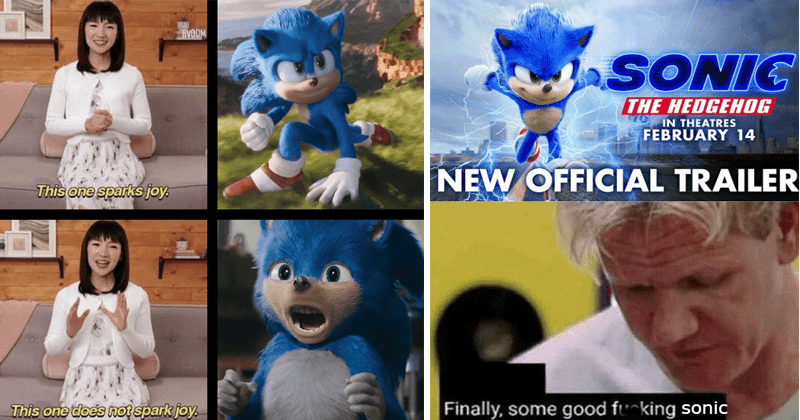 Tumblr Thread: When In Doubt Ask The World's Craftspeople

Spoiled Son 'Disgusted' When Uncle Gifts Him An Android, Says He Refuses To Be Seen With it