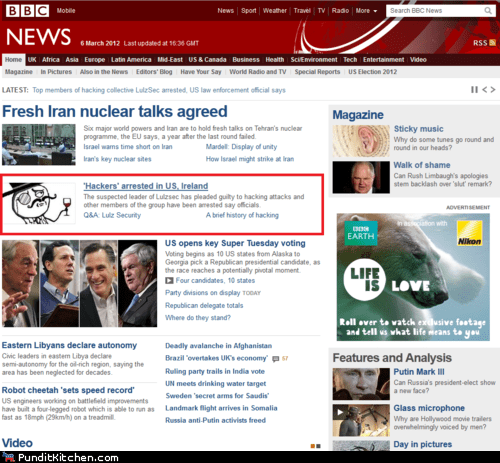 Reports indicate that hacking group Lulz Security, commonly known as "Lulzsec," has been betrayed by its leader. 28 year-old New Yorker Hector Xavier Monsegur, known online as "Sabu," has apparently been working with the FBI for months to bring down his own buddies. These efforts have culminated in "a string of arrests" today in the United States, England, and Ireland. Lulzsec was responsible for cyber attacks on Sony Pictures, the CIA, and senate.gov, along with a number of video game-related websites. They are an offshoot of the larger worldwide hacking group Anonymous.

Their logo, which is otherwise known as the feel like a sir Rageface, is ever so delightful on the homepage of the BBC.

46 Memes For A Break From The Madness

20 People Who Should Be Banned From Using The Internet

20 Reasons Why 'Smart Devices' Are Actually Dumb As Hell

A Multitude of Funny & Relatable Memes

48 Hilarious Memes To Shamelessly Giggle At