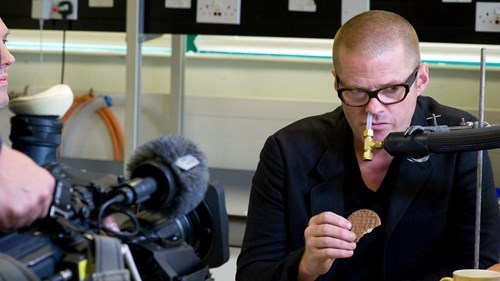 When Blumenthal hooks himself up to the device and starts chomping on a chocolate-covered digestive, the MS-Nose sends data back to a computer screen, where the levels of flavor released are plotted on a chart.

"We're measuring the biscuity flavor — known as methylbutanol to the boffins" — (that's British slang for science types) — he says during an episode of his show that aired in the U.K. last November.

Methylbutanol is a compound that gives cookies and baked goods a toasty or malty taste. When Blumenthal chews on a dry biscuit, the flavor dutifully registers on the line graph on a screen. But when he then dips the biscuit into tea and takes another bite, the "flavor line" noticeably spikes up on the chart.

"The results are astonishing!" he exclaims. The wet biscuit not only released more cookie flavor, but the aromas also burst into Blumenthal's mouth more quickly

Karen Orders Around Random Guy Who She Thinks Is Deaf Employee

Funny Gems from the Rich Mines of Tumblr

Tumblr Thread Dives into Peculiarities of Recipes in Different Cultures