Tech News of the Day: Facebook Launches ‘Work’ for Businesses 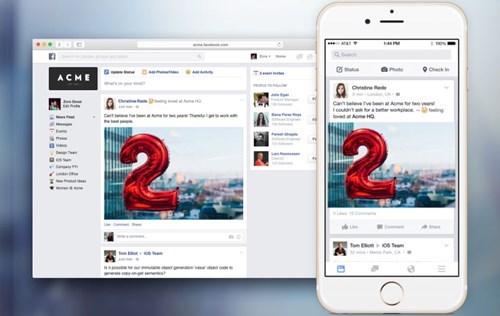 Facebook is infiltrating your office with the release of a new iOS and Android app called "Work," which will initially only available to a limited number of companies participating the pilot.

The new app isn't exactly the Facebook you are used to. It's an internal social network designed as a communication tool for companies to collaborate on projects without using email.

In other words, it's not for watching cat videos, it's for doing your job.

The new app uses the same interface as the standard Facebook app, but the information is private within your company, and you can create individual groups for specific projects.

Users can create a separate login or link their personal accounts to the professional accounts, but the information posted for work stays in the Work account.

There are no ads and it's free at the moment, but Facebook will most likely charge a subscription fee at some point, according to WSJ.

Dad Fires His Son for Stealing from Work

Triumphant Times Liars Got Called Out

Safety Failures That Would Have Osha Filling Its Pants

People Who Aggressively Didn't Get The Joke