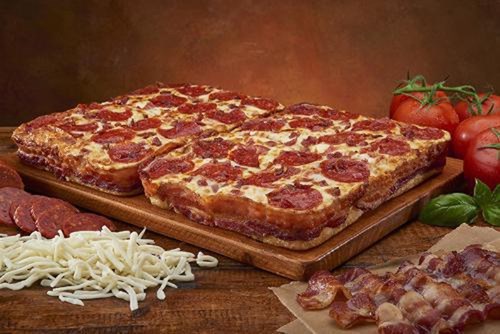 Come February 23, Little Caesars Pizza is single-handedly going to give everyone in America a heart attack.

The company announced Wednesday that it will begin selling a new deep dish pizza with a crust that is wrapped in 3.5 feet of bacon.

It will contain two different types of bacon and will also be covered in pepperoni, because you need to eat more meat.

"It's unabashedly delicious," said Little Caesars spokesman Edward Gleich. "That's why we like to say, 'In Bacon We Crust!'"

This is just the latest in a long line of fast food monstrosities which get a lot of a attention online for their freakish nature and often unhealthy ingredients.

Recently KFC in the Philippines introduced us to a new iteration of its "Double Down sandwich, the "Double Down Dog," which consists of a hot dog covered in melted cheese with a piece of fried chicken as the bun.

And Pizza Hut in Australia announced back in December that it was selling a stuffed crust pizza covered in Doritos.

Little Caesars' Bacon Wrapped Crust DEEP!DEEP! Dish will cost $12 and be available until April… or when our arteries are sufficiently clogged.

Posted by ichc.chrispeeler
and 5 more...

People's Most Triumphant "I Told You So" Moments

Mad Lads Who Made The World Their Playground