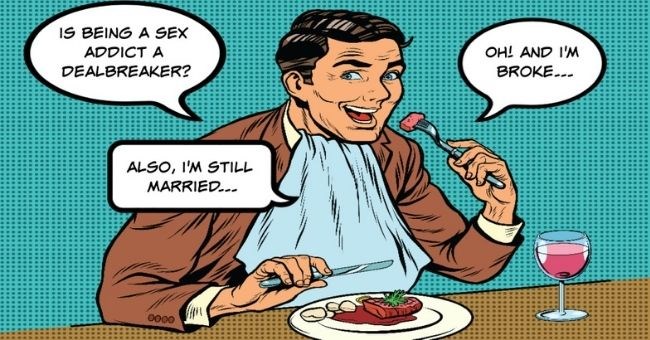 Let's be real. We all have our flaws. A first date, however, is not exactly the best time to shine a blazing spotlight on these flaws OR unfortunate emotional baggage. Putting the best version of yourself is usually the way to go when meeting a potential mate for the first time, but apparently...some people didn't get that memo. On the other hand, perhaps it's best to let those red flags fly high in order to avoid any unpleasant surprises in the future. Whatever way you look at it, here is a list of the craziest things men have admitted on a first date.

Teachers Who Have Less Chill In Online Classes Than IRL

TheSingleSociety
Nikki is currently living in NYC with her husband (who she met on Bumble after experiencing the absurdity of online dating) and working in digital marketing. She clearly enjoys recording the ridiculous debauchery that is the modern dating scene. Nikki is also partial to a tall glass of Prosecco, her black/calico kitties, 90s music and playoff hockey. Drop her a line if you have a good story for her to write about.

Ignorant People Getting Savagely Roasted Online Will Never Get Old