WTF of the Day: Nazi Cows Turned Into Sausages After Trying to Kill Farmer 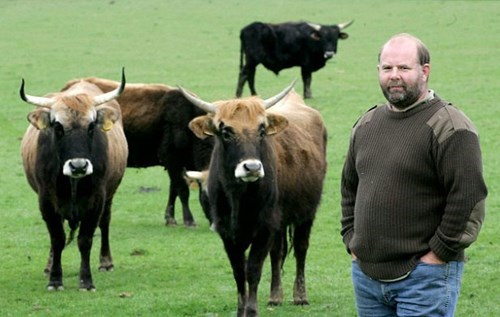 Via The Daily Mail
Repost
Recaption

A british farmer named Derek Gow (not a Nazi) recently killed and ate some of his Nazi-bred cattle after discovering they were too violent towards him and his staff to keep around the farm.

He originally imported 13 of the rare "Heck" cattle, which were genetically modified beasts created for the Nazi regime by German zoologists Heinz and Lutz Heck back in the 1930s.

Adolf Hitler wanted to bring the legendary Auroch back to life, an aggressive beast with large horns that went extinct back in the 1600s.

The Nazi scientists combined Spanish fighting bulls with Highland cattle and several other breeds to produce the monsters, which were then used as propaganda.

Most of them were destroyed after the war, but some survived. Gow received his herd from Belgium in 2009, marking the first time the creatures have appeared in England in 4000 years.

The meat from the Nazi cows that were slaughtered will be sold to stores in Europe, says Gow. He tried sausages made from the animals and described it as "very tasty."

Funny Tweets as Sweet as Treats

Woman Calls Off Wedding After Fiancee Complains About Wedding Dress