Someone Took a Hot Dump on This Fella's Tesla, and He Needs Your Help Finding the Culprit 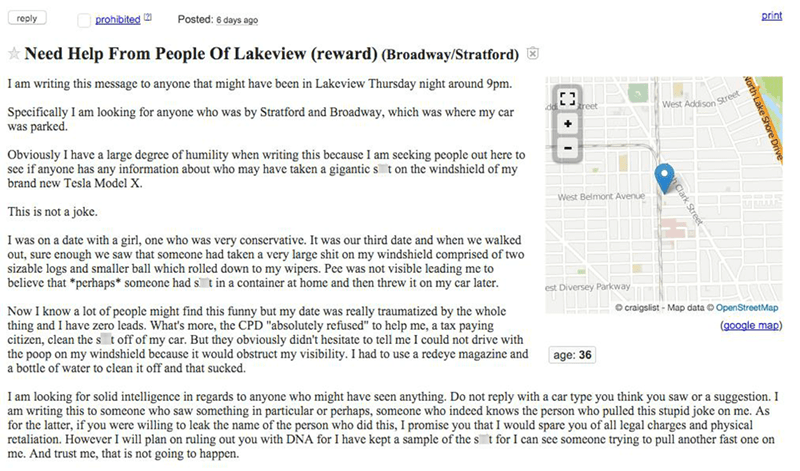 Were you in Lakeview, Chicago recently? Did you happen to see someone dropping a deuce on a brand new Tesla Model X? Perhaps you might be able to help this guy, who is seeking the perpetrators of this hilarious prank (but beware: he may ask you for a sample of your poop to rule you out as a suspect). Here's the Craigslist ad he posted about the incident in full:

I am writing this message to anyone that might have been in Lakeview Thursday night around 9pm.

Specifically I am looking for anyone who was by Stratford and Broadway, which was where my car was parked.

Obviously I have a large degree of humility when writing this because I am seeking people out here to see if anyone has any information about who may have taken a gigantic s**t on the windshield of my brand new Tesla Model X.

This is not a joke.

I was on a date with a girl, one who was very conservative. It was our third date and when we walked out, sure enough we saw that someone had taken a very large s**t on my windshield comprised of two sizable logs and smaller ball which rolled down to my wipers. Pee was not visible, leading me to believe that perhaps someone had s**t in a container at home and then threw it on my car later.

Now I know a lot of people might find this funny but my date was really traumatized by the whole thing and I have zero leads. What’s more, the CPD “absolutely refused” to help me, a tax paying citizen, clean the s**t off of my car. But they obviously didn’t hesitate to tell me I could not drive with the poop on my windshield because it would obstruct my visibility. I had to use a redeye magazine and a bottle of water to clean it off and that sucked.

I am looking for solid intelligence in regards to anyone who might have seen anything. Do not reply with a car type you think you saw or a suggestion. I am writing this to someone who saw something in particular or perhaps, someone who indeed knows the person who pulled this stupid joke on me. As for the latter, if you were willing to leak the name of the person who did this, I promise you that I would spare you of all legal charges and physical retaliation. However I will plan on ruling you out with DNA for I have kept a sample of the s**t for I can see someone trying to pull another fast one on me. And trust me, that is not going to happen.

If you have any information about whoever pinched a loaf on this guy's expensive car, you might want to figure out a way to reach him, provided you're willing to provide a DNA sample. Hopefully he'll be satisfied with a cheek swab. Unfortunately, his Craigslist post has been removed, but where there's a will, there's a way. I'm guessing if he's wealthy enough to afford a Tesla, he can afford a little ransom on your information.

27 Relationship Memes That Are Overflowing With Sarcasm

23 Savage Moms That Are Experts At Trolling

Buckets Of Memes To Combat Boredom

A Bunch Of Memes For People Who Like Unintelligent Humor

24 Cringe Pics To Make You Feel Better About Yourself

Fifteen Times Liars On The Internet Got Their BS Rightfully Exposed

Buckets Of Memes To Combat Boredom

23 Savage Moms That Are Experts At Trolling