Ice ice baby. Whether it's cold or diamonds, we've got all the chilly and scintillating jokes and puns to warm your heart.

A massive ice drift on the Amur River in Eastern Russia climbed up the banks of the town of Khabarovsk, smashing a metal barricade. While the drift didn't hurt anyone, it did succeed in looking like an angry ancient river god trying to invade dry land. It's like a slow motion tsunami. 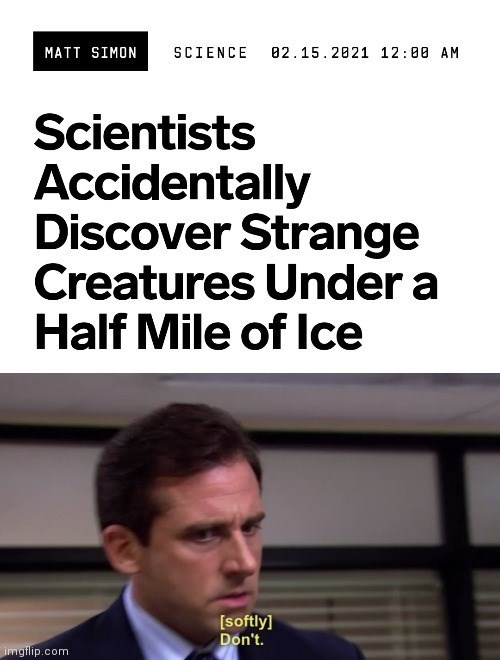 We've had enough pain in the last year.

Dog That Fell Through Thin Ice Gets Rescued

"Our Deputies are out there to keep the public safe. That also includes our furry family as well," tells sheriff Bartlett to NEWS 10 after rescuing a dog that feel through thin ice into the water, and we are so, so thankful that they came to rescue the pooch as fast as they did.

This could have ended up as any pet owner's worst nightmare, but luckily, this story has a happy ending. In the recent weeks, officials in the area have been warning the residents about the dangers of thin ice, and sadly, we found out that it's not just us humans who are at risk of falling through it. Shortly before noon on Friday, in Ancram, N.Y., the police got a call about a dog who fell through the ice.

As NEWS 10 reports, Sergeant Heath Benansky, who is also a dog handler, was the first officer on the scene and successfully managed to get to the scared pup using a paddle board. He along with Deputy Torchia rescued the dog.

"I am very happy to have such a well trained ice rescue team that was able to deploy so quickly. Had they not gotten there so fast, there could have been a much sadder outcome," said sheriff Bartlett.

The pooch was later identified as "Andy" and was returned safely to shore, and after finding Andy's owner through social media, she was returned to her owner as well.

This is a lesson for all of us to learn to be more careful with our precious little pets, and thankfully, this lesson was learned with no permanent harm caused. It's the kind of happy ending story that we love to read about, and for more of those, read about an owl with three gunshot wounds getting released back into the wild. 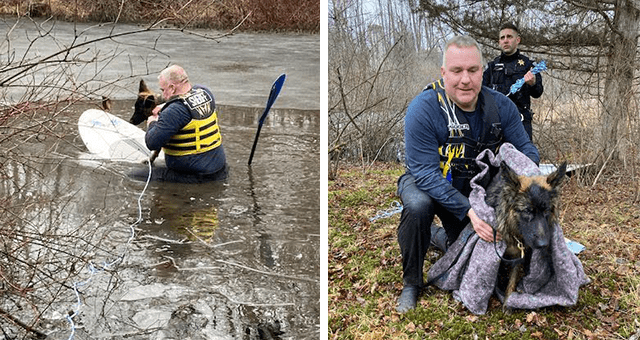 Drilling for ice cores in the Antarctic has its perks, like hearing the freaky sound of ice dropping down an extremely long ice tube. It legit sounds like they're shooting a space western down there.

Here are some big powerful icicles that destroyed a few windshields and caused loud, catastrophic mayhem.

Dank Memes That Make Fun Of The Negligence Of School Nurses

Remember those days in elementary school when you'd fall on the playground and get sent to the nurse's office, only to be given an ice pack and get told to get back to class? Even if the injury was more serious, an ice pack or a little band-aid always seemed to be the routine course of action. Those were the days. 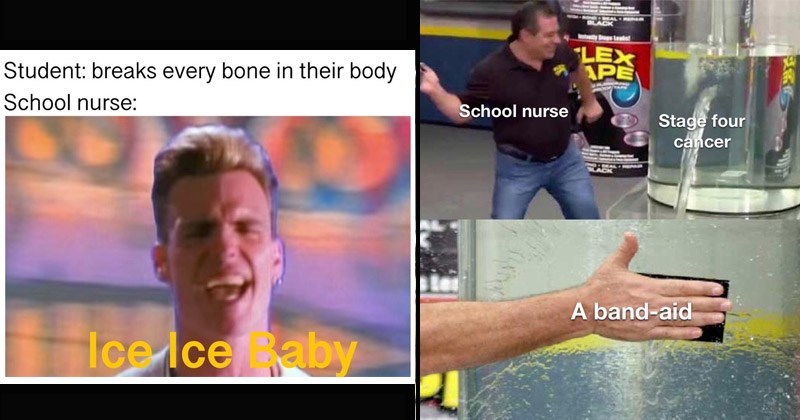 Antarctica is one of the world's most mysterious continents. Covered in 98% ice, and the last in the world to be discovered and explored, this place is the most uninhabitable on earth, and is covered in ice that in places is almost 2km thick. First discovered in 1820 by Russian explorer Fabian Gottlieb von Bellingshausen and Mikhail Lazarev, it would take until 1895 that the ice continent would be explored properly. The continent is also wrought with controversy, with multiple countries staking claims to different parts of it, with some of them overlapping.

But as the world has started to shift and the environment with it, scientists have started to witness hitherto unseen changes that had only been recorded historically in our findings in the ice. But a hole that was discovered in the center of the continent has got scientists abuzz over the developments. So what happened here? Is this natural or another example of man's effect on the global environment. 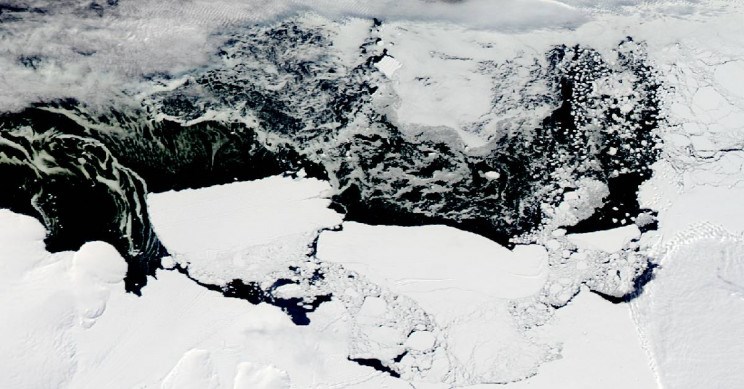 Horse Was Rescued After Being Trapped In Ice For Four Hours

Natalia Teplova, a horse owner in Edmonton, Canada, noticed one of her horses was missing when she called for them on Saturday morning. The missing horse, Lexi, didn't show up with the other horses.

"We went calling for the horses and usually they come up. This time, the other horses came up but she wasn't there," Teplova told CTV News.

As any concerned animal owner would do, Natalia and her husband began a small search party and set out to scour the area around their property, and find Lexi. They searched and searched and nearly decided to give up looking for Lexi that is until Natalia's husband horse he had been riding called out, and Lexi responded.

"Then he called again and she responded again, and I started running," Teplova said. They found Lexi have been trapped, full submerged in ice-cold water. "Her head was sticking out above the ice. She was submerged all the way to her withers—her shoulders. Her front feet were out. She was barely holding up there."

Teplova called 911 for assistance, and she and others slid ropes around Lexi's body to prevent her from sinking any further. And just to give some clarity as to just how freezing this water was, Teplova added, "I put my hands in just to get the ropes around, in the water, and within seconds, my hand went numb. So that was very, very cold."

Together with the firefighting units, they were about to successfully pull out Lexi -- along with a bobcat!

It was estimated that Lexi had been trapped in the ice water for at least six hours. 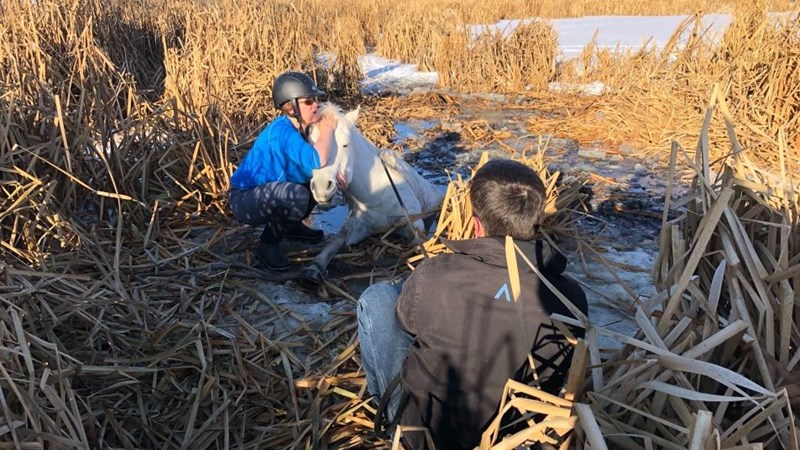 This guy doesn't seem to be doing much at the beginning of the video. But as it goes on, slowly but surely the shape begins to form and the result is simply stunning. With something that can go horribly wrong with a single wrong cut, or an art piece that can simply be a disaster if the angle is off, this artist shows what practicing your craft with tenacity can produce. 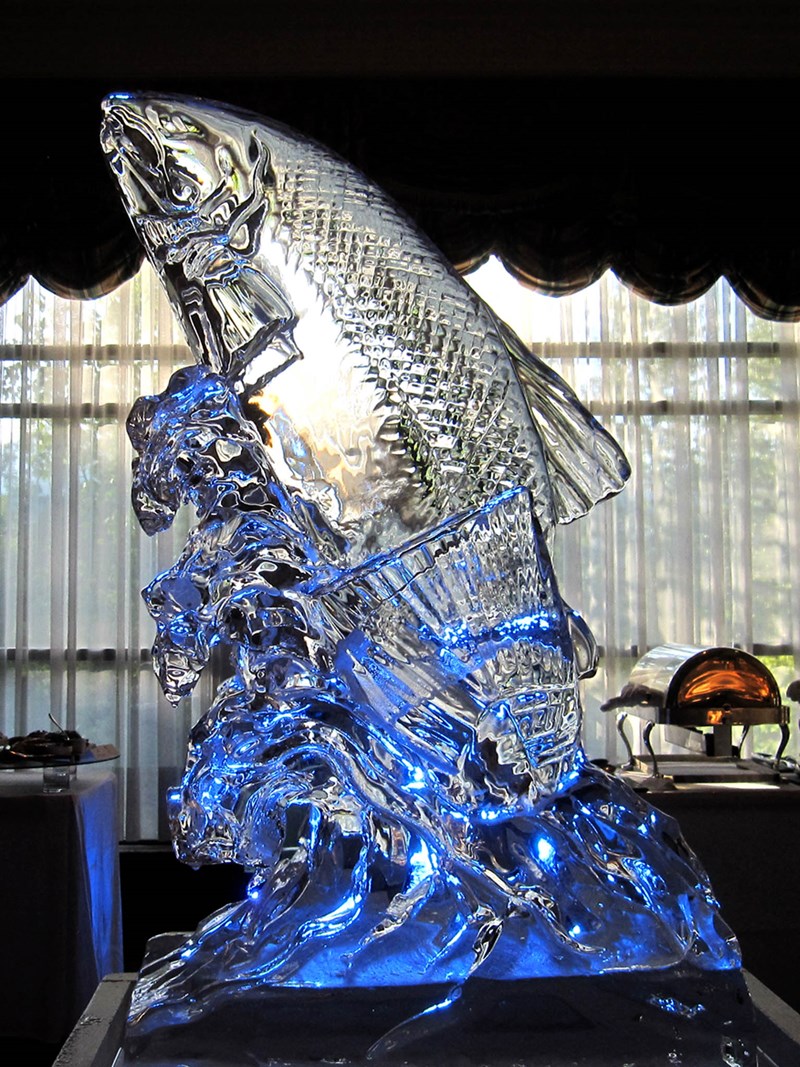 23 Impressive Moments of Misfortune and Failure

You should never expect things to go your way all the time. However the manner and variation of disappointing moments are completely unpredictable. Will you get rear-ended on your way to work? Or will your pancakes just look at you weird? There's just no way of knowing how things could go wrong. 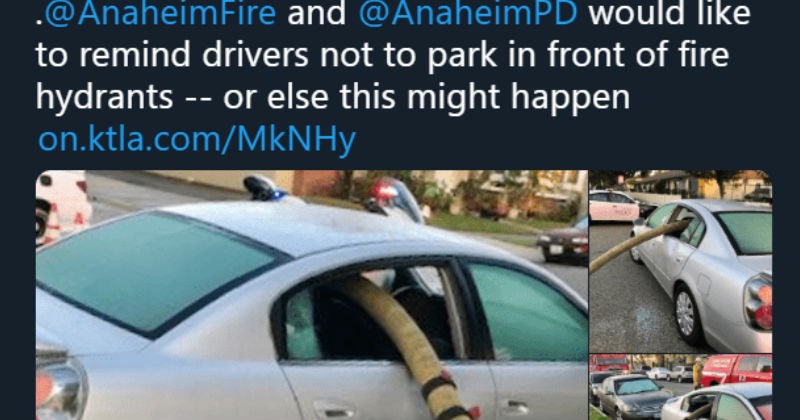 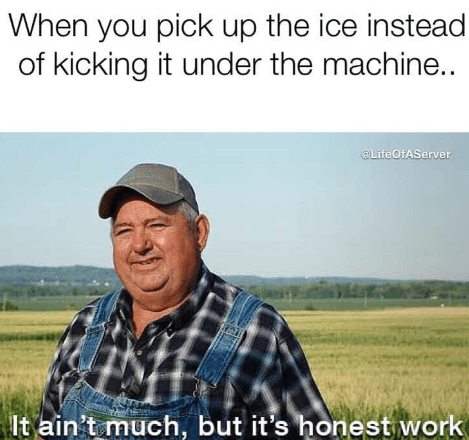 Y'all trying to tell me you never get that kick urge?

We might consider watching Big Bang Theory if you had this lady doing all the laugh tracks.

Is it loud? Absolutely. Is it obnoxious? Kinda, yeah. Does it pair well with two people struggling in an icy driveway. Yes, probably, yes.

It's hard enough getting through a normal day! The universe took it upon it's crappy self to lump even more problems onto these unlucky people. At least we get to see how bad these folks ad it and "oooh" and "aaah" at their misfortune. If you're a sicko like us who'd like to see more people having a bad time then check these out. 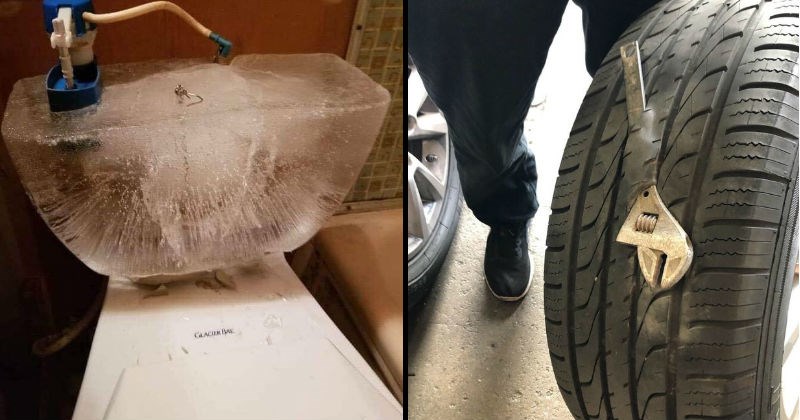 23 Unfortunate Times People's Days Took a Turn for the Worse

Even a normal day is going to have its small tragedies. Maybe you forgot something at home. Maybe traffic made you late. While we can all agree that a normal day has its own disappointing pitfalls, someone is having an unusually bad day. There's someone out there who's looking into an unyielding void of disappointment. 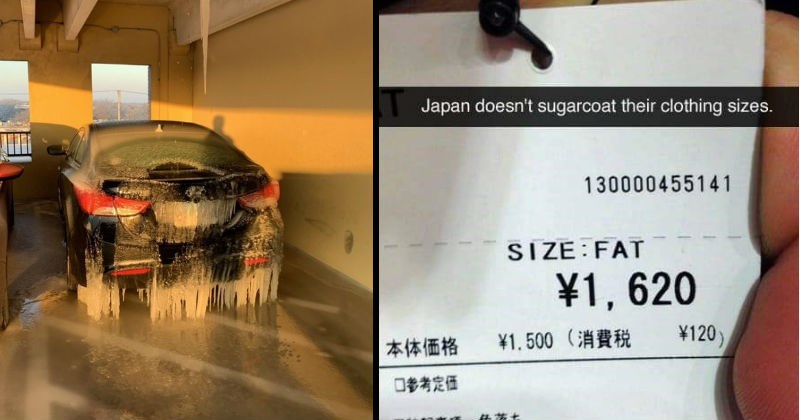 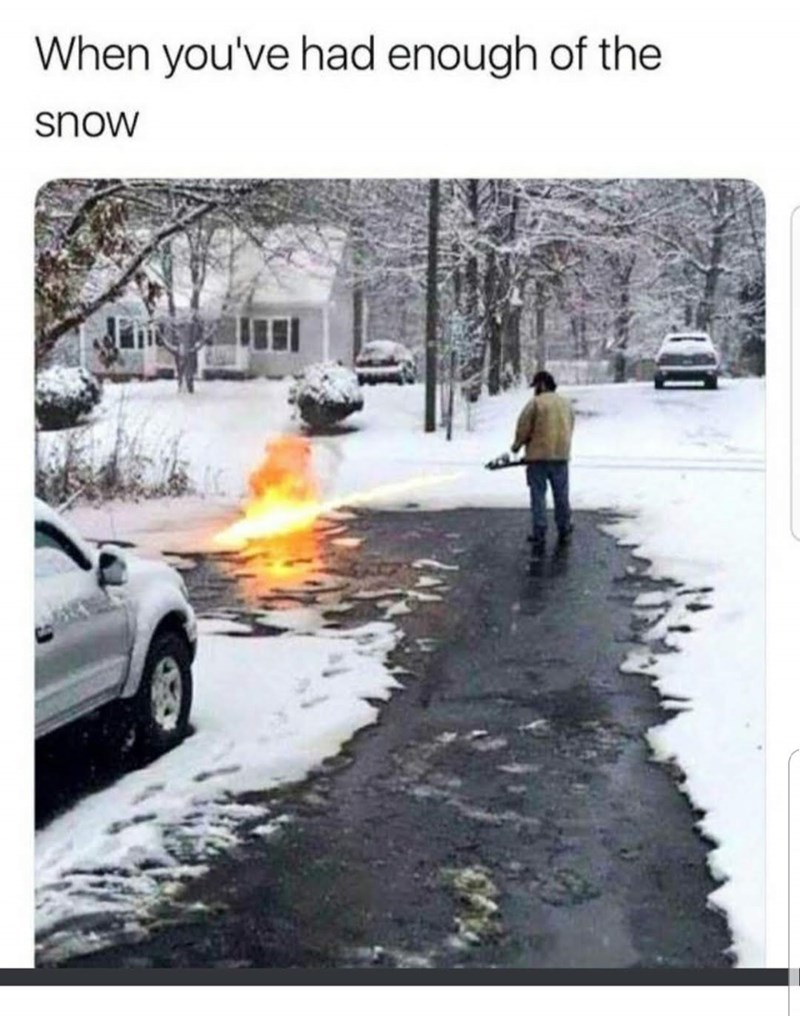 Winter is so last season.

Arguably The Worst Month Of The Year? 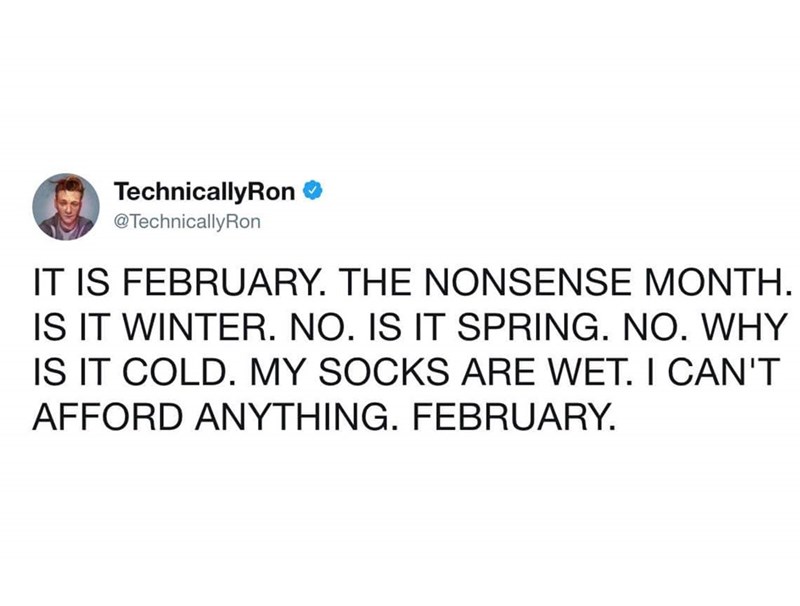 What do y'all think?