Memes Lose Another Target As Jeff Bezos Steps Down From Amazon

It's the end of an era for big business and the memes that love to satirize it. It was confirmed yesterday that Jeff Bezos would step down as Amazon CEO this July, with an expectation he would focus on his other projects.

As famous for his tax-dodging as he is his online empire, his unavoidable presence in the lives of almost everyone in Western society has made him a very memeable man. In fact, even his appearance has been compared to that of the actual Meme Man. Combining a mysterious high profile with a penchant for headline-making unethical business practices, his impact has left plenty of room for dystopian punchlines.

Jeff Bezos occupies a peculiar place in the hierarchy of memeable billionaires. He's not desperate to be cool in a way that draws attention to Elon Musk, and he's too proud for the nerdy false modesty of someone like Bill Gates. Although he's pretty good at giving off sinister robot vibes, nobody does that better than the Zuck himself. Unlike his peers, the focus is less on his public persona and more about the cold hard cash.

As a result, the content in his orbit often focus on the corporation as opposed to the individual, such as its working conditions or anti-union stance. However, there has been a longstanding side hustle in memes about the man, too. You don't get to be that rich without letting the rest of us have a virtual tomato throwing contest, those are the rules. 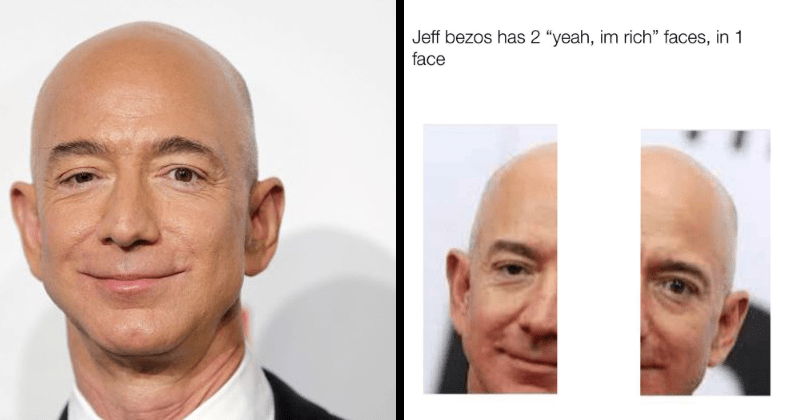 14 Sassy Billionaire Memes That Are Too Rich For Our Blood

In the midst of the 2020 presidential elections, there's been a plethora of jokes and memes made about cringey billionaire Michael Bloomberg and his Meme 2020 campaign.

Let's face it, this country is effed in pretty much any potential outcome of the election, so let's just say f*ck it and laugh over some memes about people who are too rich for planet earth. 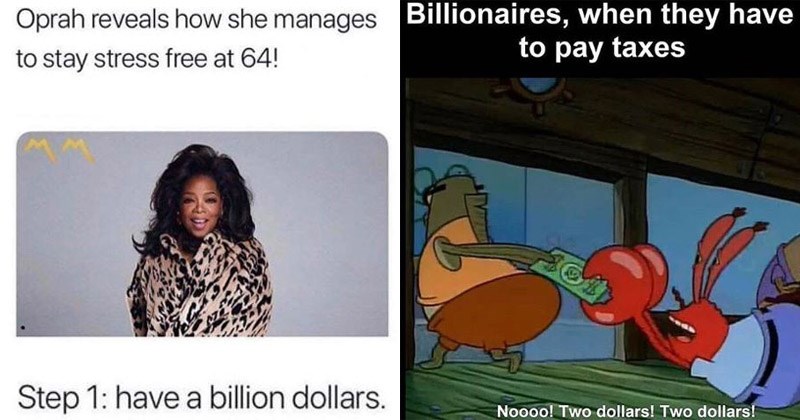 If you've got a short attention span and are craving some laughs, Twitter is basically a godsend. The only problem is the fact that there is so much awful and unfunny stuff waiting for you on that godforsaken website. To save you the pains of being subjected to its cringey takes and political diatribes, we've put together this gallery of quality tweets. It's all the good without any of the bad. Happy scrolling. 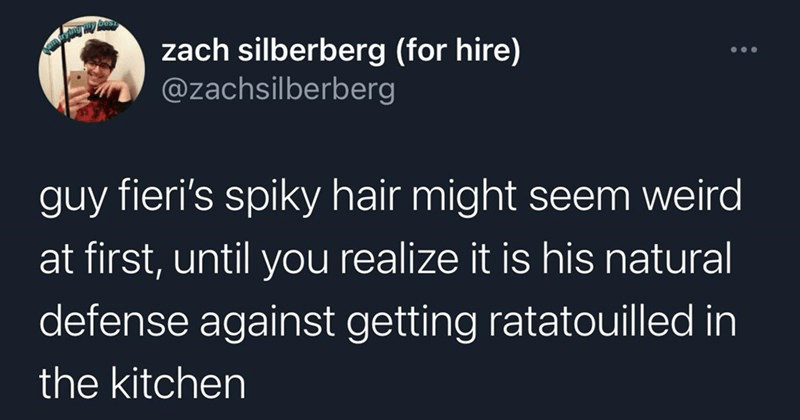 Memes & Tweets For The Fed Up Working Class

Looks like we're entering another lockdown in America as Covid-19 spikes across the country. And guess what? Millions of people are still unemployed, don't have health insurance, and CARES Act programs are about to expire. But for the United States, screwing over its workers who produce all the wealth for the country is nothing new. The long-standing structural failure in America is simply rearing its ugly head now that crisis is ubiquitous. But hey, at least we have memes!

If you're pissed off like millions of other common Americans, these relatable working class memes might resonate with you.

DISCLAIMER: This page is for entertainment purposes only. If you have questions about Coronavirus, or think you came in contact with a COVID-19 carrier, please check the CDC FAQs or contact you local health provider for accurate information. Stay safe everyone. 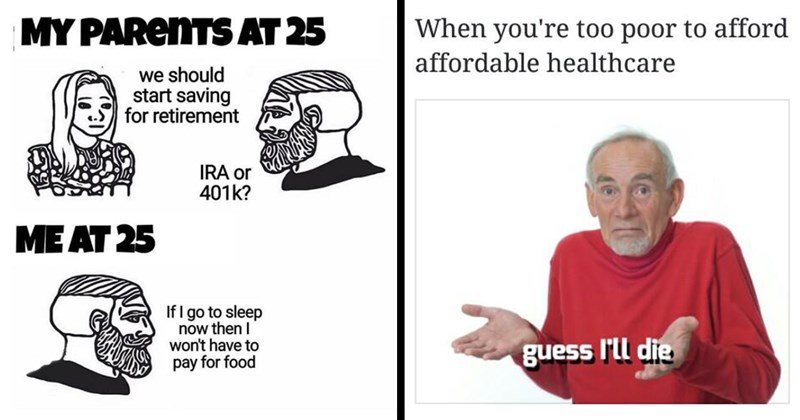 Being super-wealthy (and we're talking Jeff Bezos the founder of Amazon kind of wealthy), has its perks - the most obvious being that you can buy whatever you want, whenever you want. But one of the lesser-known hardships of being one of the richest men in the world is that it's actually harder than you think to spend that sort of money. A hilarious Twitter thread by Metro UK shows just how difficult it is to spend Bezos' net worth, which happens to be $189.3 billion. Read on and laugh, and be grateful that you don't have such a struggle in your life... 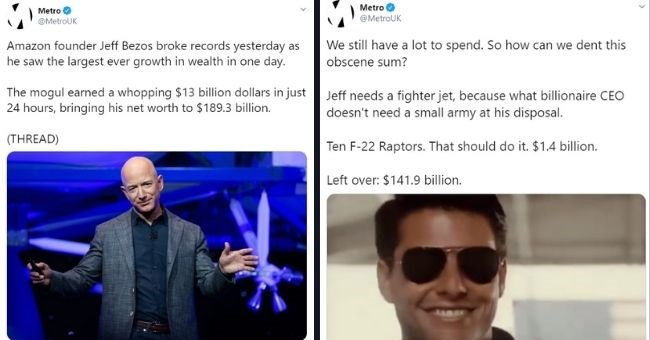 "Wait, they have clothing that's not organic? Somebody needs to donate this to a homeless shelter."

Dude Uses Rice To Show How Rich Jeff Bezos Is

Solid demonstration. Look at all that beautiful rice.

This guy's trying to challenge the stereotype about all these brilliant tech masterminds starting their global operations from within the confines of a stuffy garage. Instead, he asserts that some of these billionaires enjoyed the benefits of other factors like generational wealth, family investments, nepotism, etc. 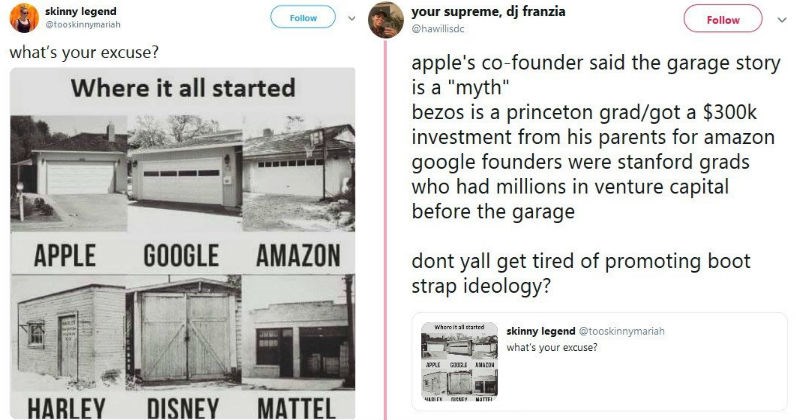 Amazonhas come under fire for allegedly creating fake Twitter accounts (under the name "Amazon FC Ambassador") to silence any criticism of the working conditions of its fulfillment centers which, if you're unaware, are known for being particularly sweatshop-like.

Recently various Twitter users have called out Amazon for this...bizarre (to say the least) behavior.

So without further ado, here are some of the best parodies and examples of the creepy Orwellian tweets! 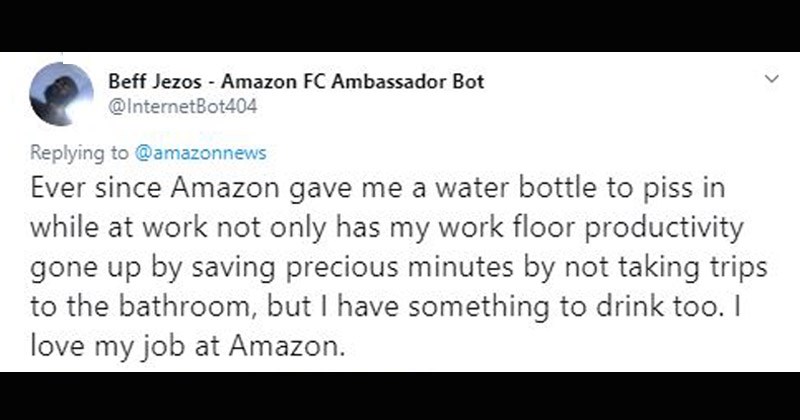 As Americans, we're all probably pretty familiar with the "garage" success story in which successful billionaires started out working in humble conditions, such as in a basement or garage until they made it big. This Twitteruser brought up an interesting different viewpoint!

This thread is pretty eye-opening, but we certainly don't want to dominate the discussion here - what do you all think? Are billionaires like Jeff Bezos and Steve Jobs self-made? Or did they receive a little more help than the rest of us along the way? 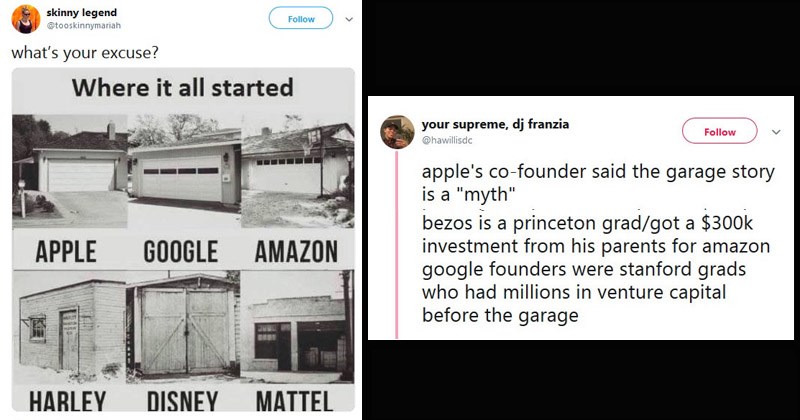 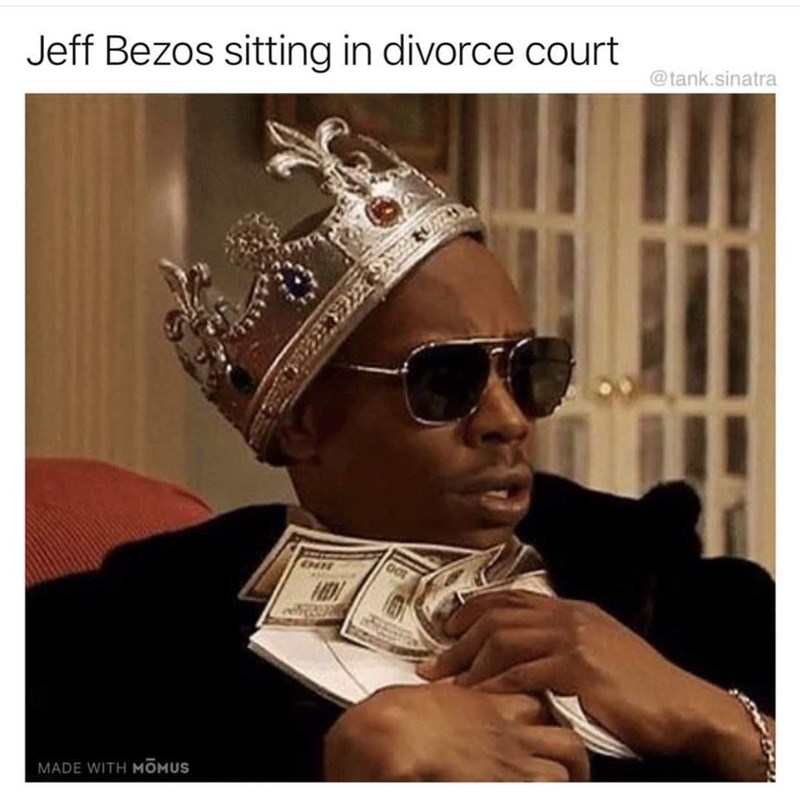 Bezos has a lot at stake here!

Oh boy, Mr. Jeff Bezos sure is in the hot seat right now for his dramatic divorce from wife of 25 years, Mackenzie Bezos. Bezos, currently the world's richest man and Founder and CEO of Amazon, tweeted on Wednesday that he and Mackenzie would be seeking out an amicable divorce after a trial period of separation.

And if you thought that wasn't enough drama for today, economists are speculating that the high-profile divorce could potentially cost Amazon billions of dollars in stock and cause Bezos, who is currently worth $137 billion, to fall down the rankings of the richest people in the world.

But here's the icing on the cake: on Thursday, The National Enquirer released a story alleging that Bezos had had an affair with former TV anchor Lauren Sanchez, along with a text message to Sanchez in which he writes "I love you, alive girl. I will show you with my body, and my lips and my eyes, very soon." Add some risque selfies to the mix and we've got ourselves the perfect recipe for some golden memes and reaction tweets. Eat 'em up!

14 Amazon Memes Just In Time For The HQ2 Announcement

Seattle-based Amazon announcedits plans for HQ2 today, stating that its two new locations will be based in Queens, New York and Arlington, Virginia. In honor of such a momentous occasion, we're bring you some excellent Amazon and Jeff Bezos memes for you to get your fill. 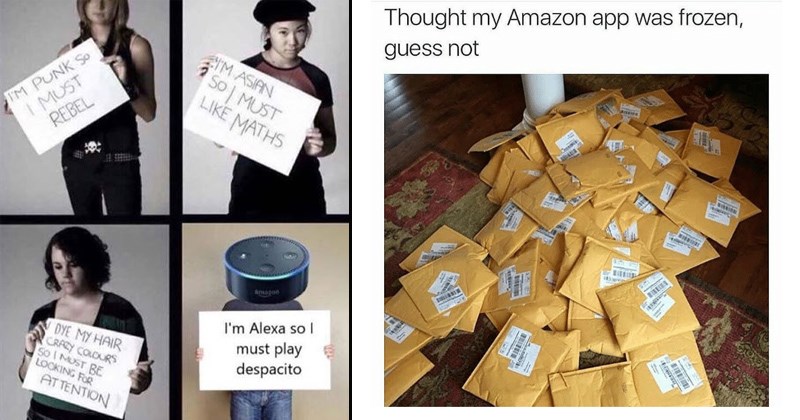 Amazon has permeated all of our lives to some extent, and it's looking like there's more growth still in the company's future. No matter your opinion on Jeff Bezos' baby, we've gotta capitalize on the excellent meme opportunities here! 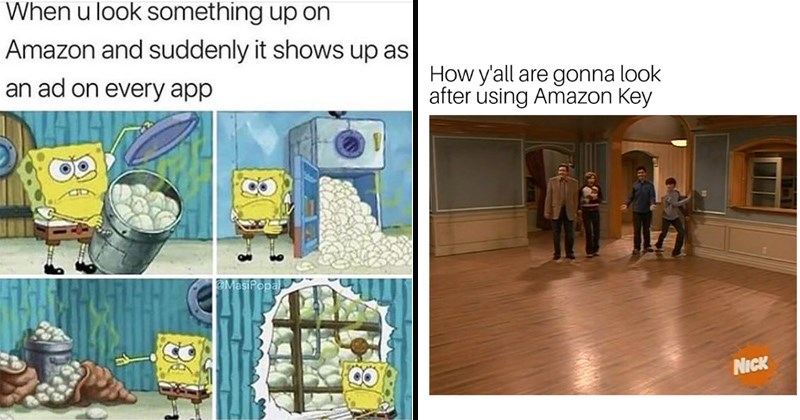 We Hear And Obey 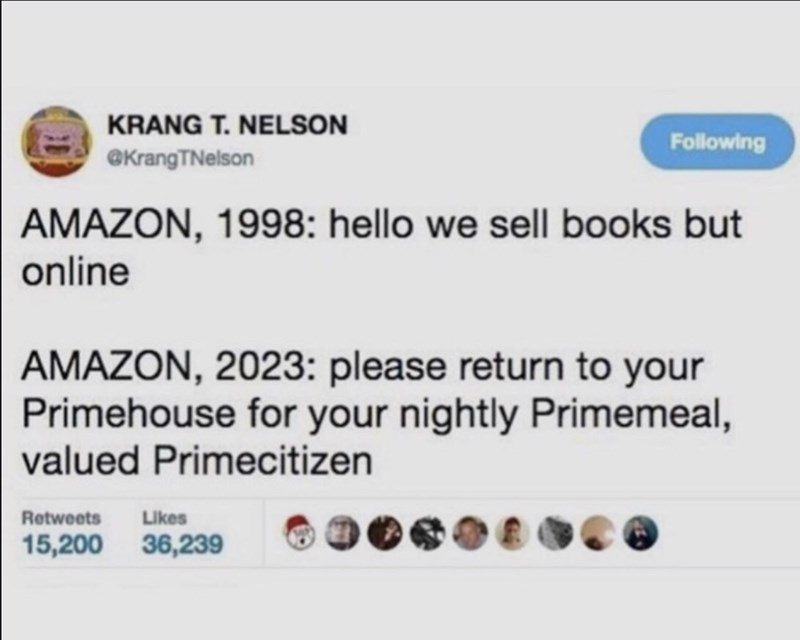 Spoiled Son 'Disgusted' When Uncle Gifts Him An Android, Says He Refuses To Be Seen With it

Tumblr Thread: When In Doubt Ask The World's Craftspeople

Restaurant Owner Has Special Wing Sauce Just For The Complainers